More times and not, I enjoy roughing out curves, fillets and chamfers by hand. However, there are times when the might of a router with a proper round over bit is the best ‘route’. When I sought out a small trim router to suit my needs, something amazing came into my sights.

Cruising around the internet, I came across the Ryobi One+ battery powered trim router. At 5A, it’s plenty of power for slingshots and other small projects, and the best part is that it interfaced with my already large collection of Ryobi Li-ion batteries. At $50 a piece, they were inexpensive enough to get a few to save on set up time. I had the idea to build some modular boxes, router boxes, router boxes that would sit on a stand with different tools set up so I could hot swap them out when I needed.

I started by using an online resource for designing finger joint boxes, my plan is to make sorta of a square hat box with the router base sitting on the top. I entered the dimensions into the online box maker and out spit a PDF of the box. After taking the file into Adobe Illustrator, I measured the outside dimension and then generated another box, this would become the lid. I digitally chopped off the top of the base box and then lopped off the bottom section of the lid. This left me with a pattern I could start dropping features onto.

The first thing was to figure out the orientation of the tool. The Ryobi trim router doesn’t have a flat base parallel with the surface of the base, this is meant to be a hand held tool, not stationary. The base didn’t matter, it only means that it would be suspended in the box. This did two things, it allowed for height adjustment of the bit (no need for a complicated lift system) and would also allow for the router base to be level with the box surface without bracing. Measuring the base of the router, it was a 9cm square with about a 3/8″ rounded corner, so that’s what got drawn on the top of the lid. Directly under the layer is another layer that would support the head and also index the router so it would always be in the same position. This is a lot of reading without much photographic explanation but it was such a fast process the later images will make sense after reading this.

The second thing was the on/off switch, being a battery powered unit, the front of the tool needed be accessible so that it could be turned off and on while in the sealed box. So locating the switch and making a generous hole in the front panel of the bottom box was done. A rotating switch plate would cover the hole so increase the dust collection effect of the vacuum…..

Which brings us to the third feature, a dust collection port. On the back panel, a 2.25″ hole was located so that a hose could be attached to have a down draft effect. While a SOME chips may make it away from this vacuum, most will be carried away. Two additional layers of material could be glued to the inside to create a .75″ flange so that hose would have something to grab onto.

Ok….so after this was designed in both my head and in 2D, it was time to prototype in MDF. Throwing a sheet of 1/4″ MDF into the laser, one by one the panels were cut out. On top is the router with the big battery. 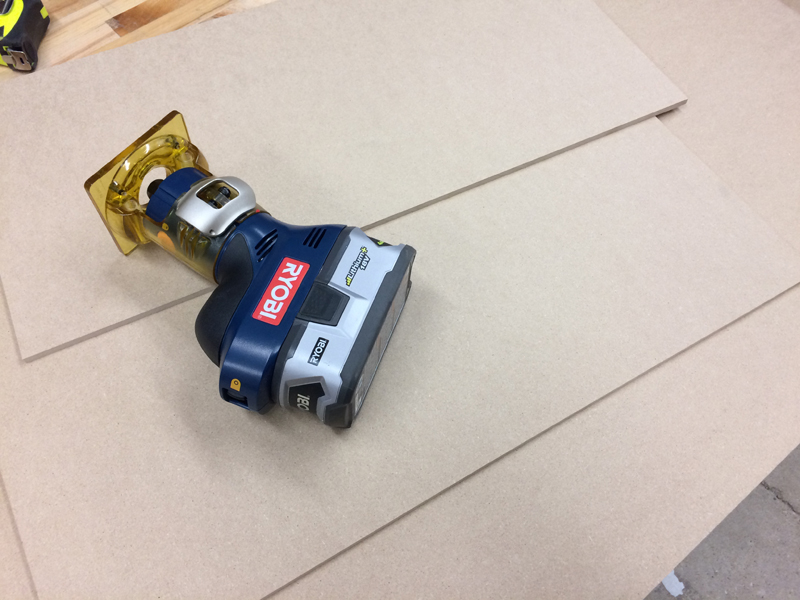 First cuts of the first panels. You can see the plate on the near the bottom of the sheet, it’s the indexing ring and support. 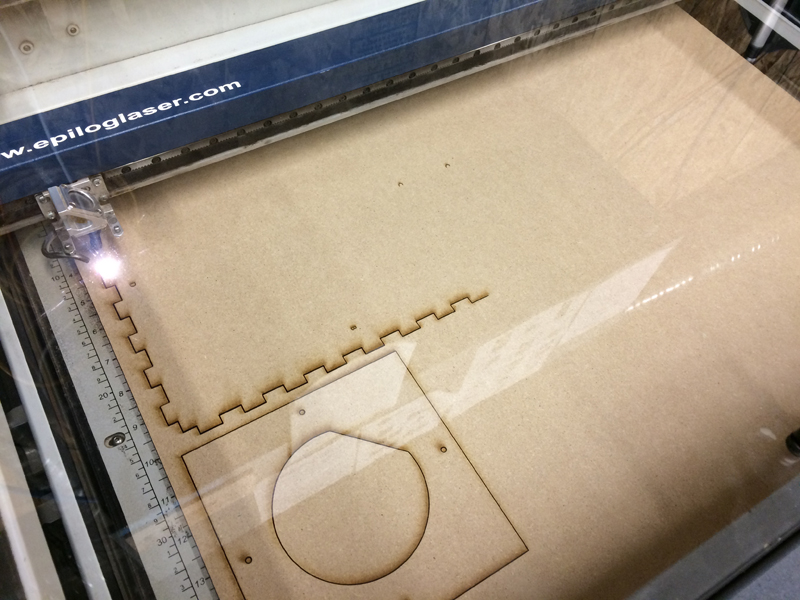 First dry fit of the parts. The finger joints were actually sized for stock that is .235″ thick and the MDF is .255 so they don’t line up here. Not a big deal since the MDF was just used for sizing and for first fitting. 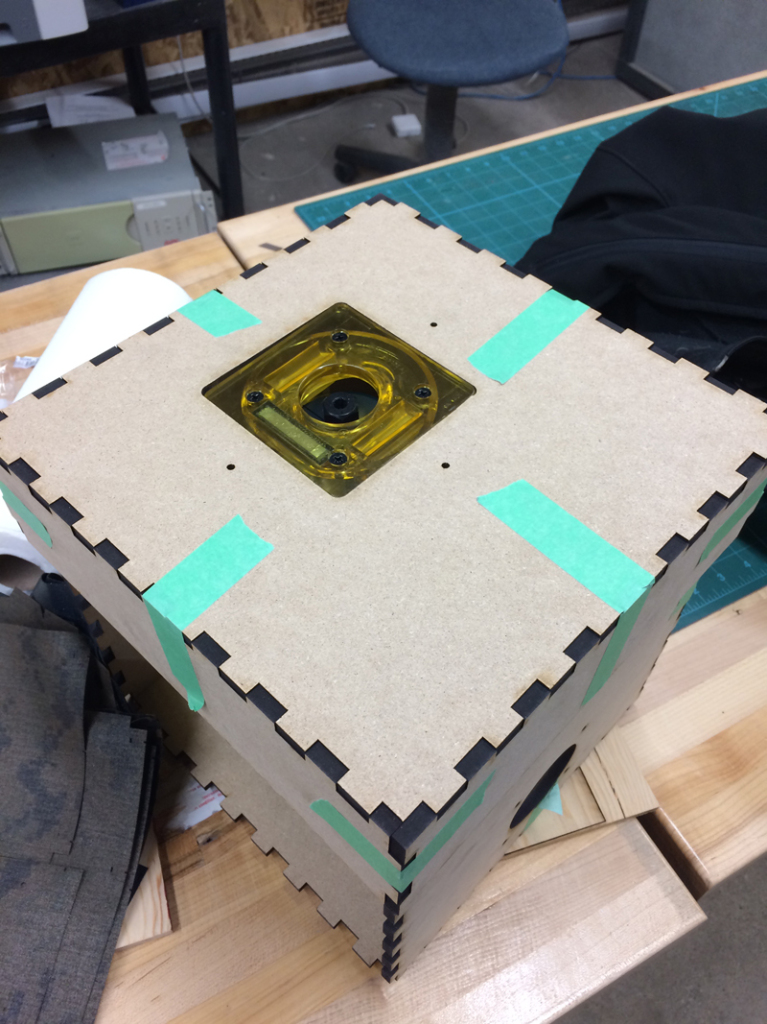 The router clears the bottom nicely and will allow for about 3/4″ of travel downwards. 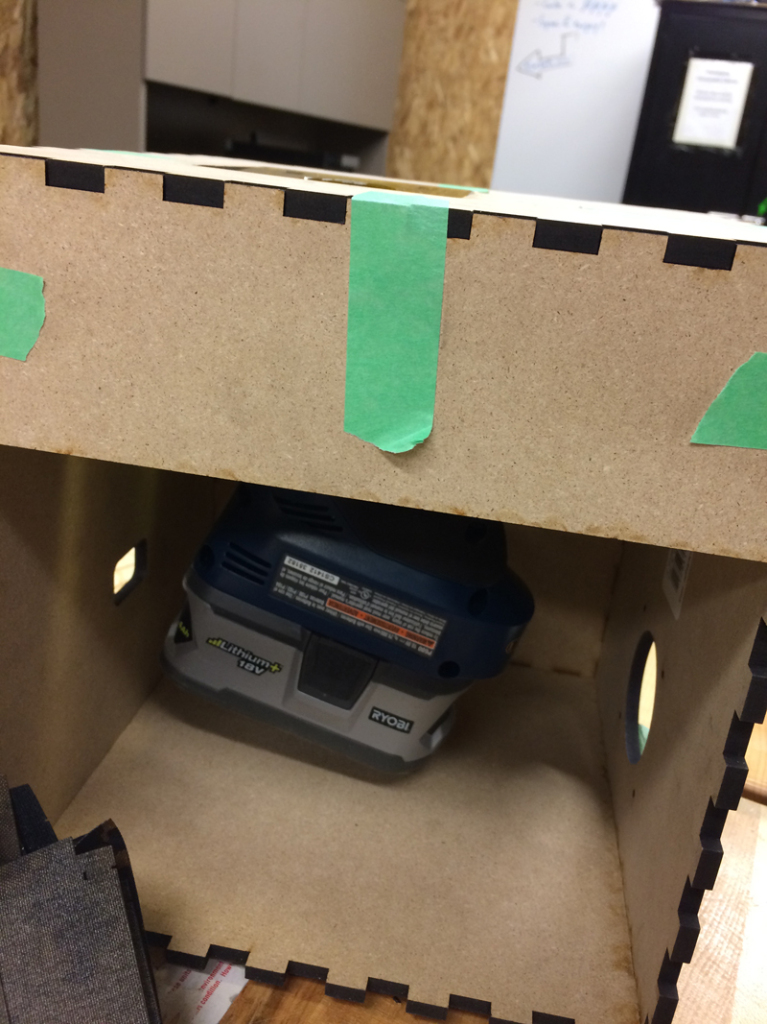 After editing the files to change a few details for alignment, it was time to move to some Baltic birch. You can see the indexing plate is now round, I forgot to account for the inside edges of the box. Ideally I this would of been made out of 1/2″ plywood, but the laser has trouble cutting that thick of stock. With a 10″x10″ foot print, the box will be plenty stiff. 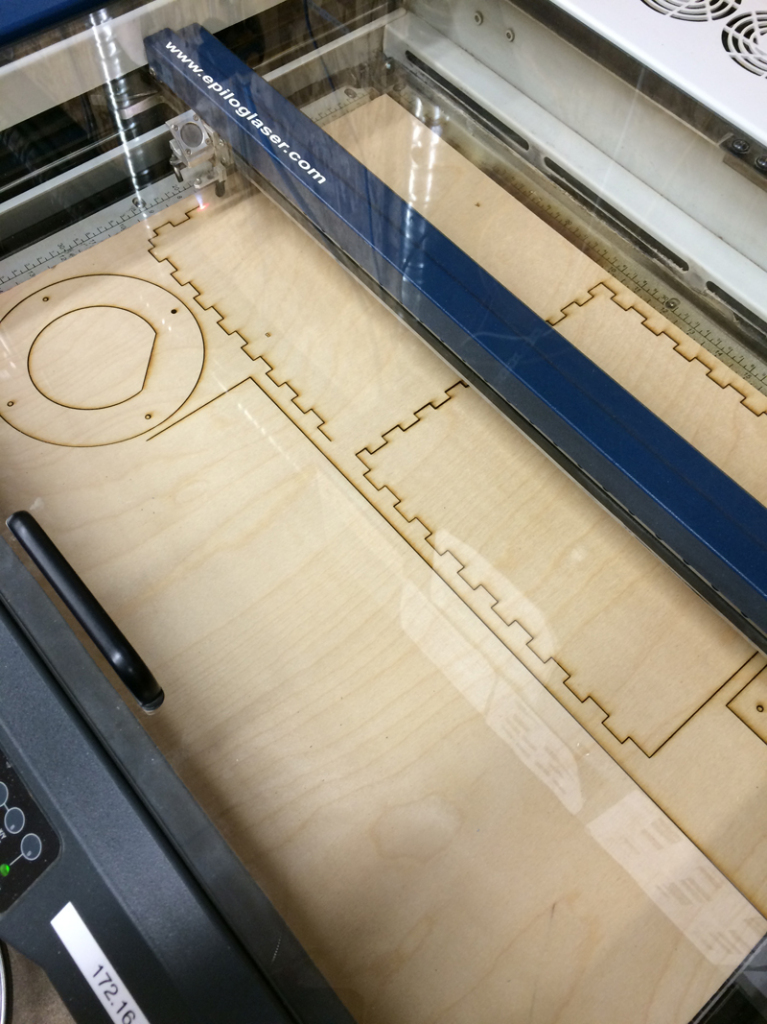 Dry fitting the plywood parts. You can see the beginnings of the dust port near the bottom of the box. 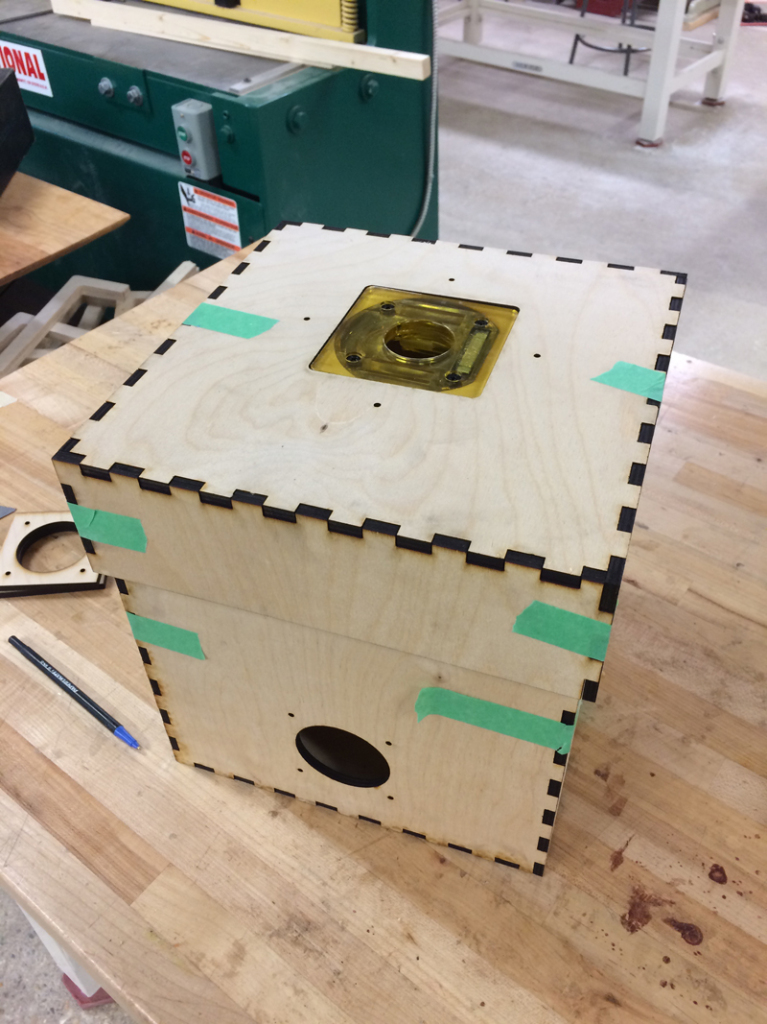 I should note that I made two of these boxes, one for each router, and my 2nd one went 4X faster like with any multiple build. The glue joints on the 2nd one are much tighter, I previously hadn’t worked with so many finger joints at once. I also sanded the edges to get rid of the burning PRIOR to gluing on the 2nd one. 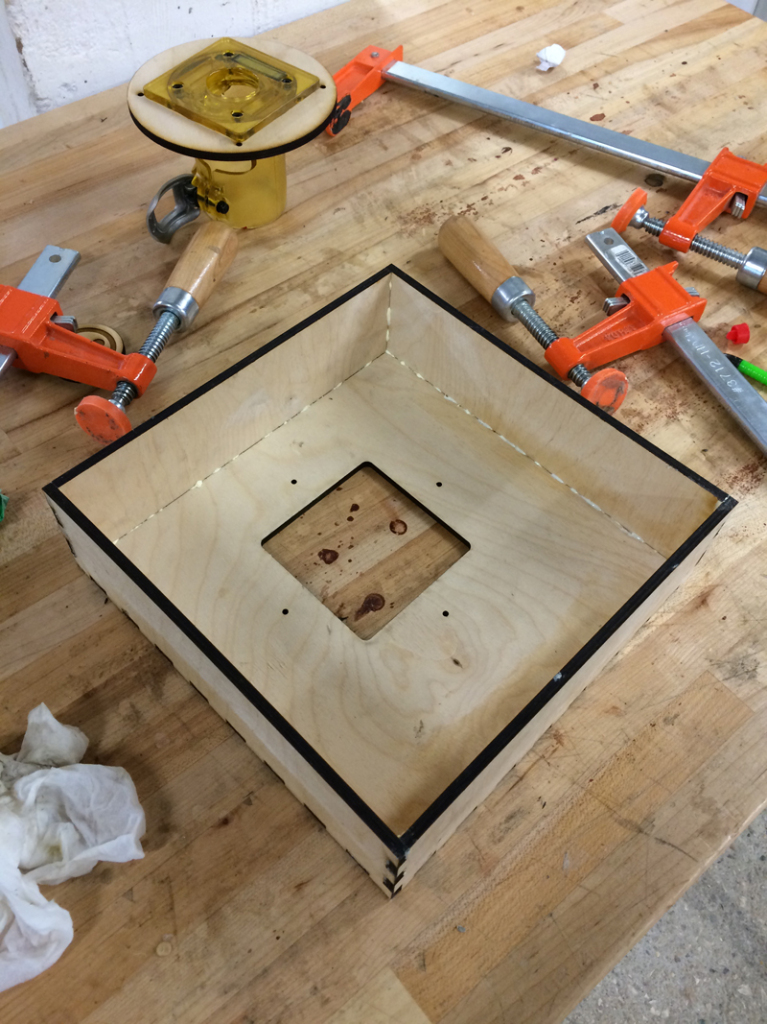 This is basically it. The rectangular hole on the front is the switch hole, this got lengthened by hand later to adjust for the bit height. The support/indexing plate was glue in place and further reenforced by 4 countersunk screws. 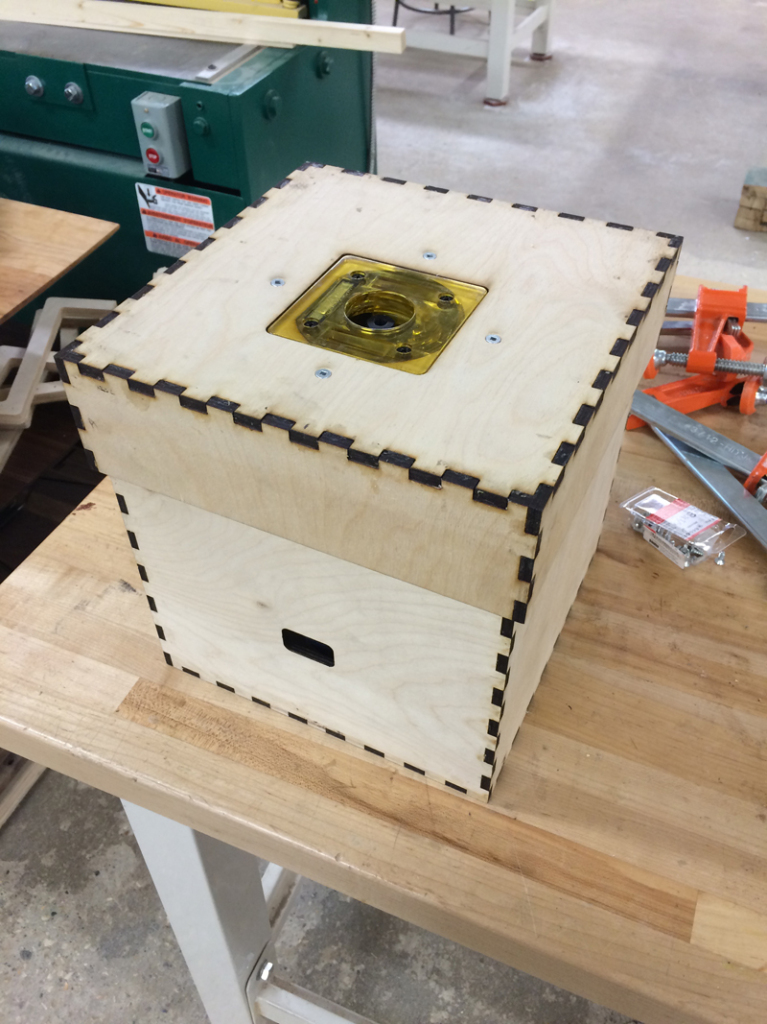 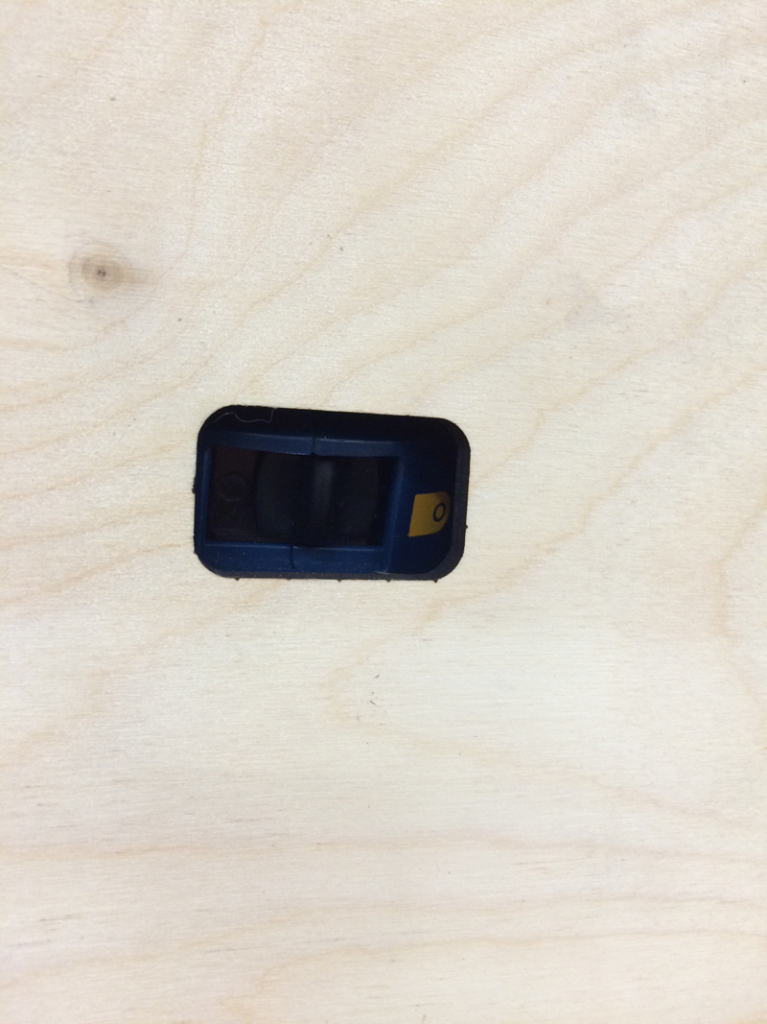 A shot of how the router looks like suspended by the support/index plate. 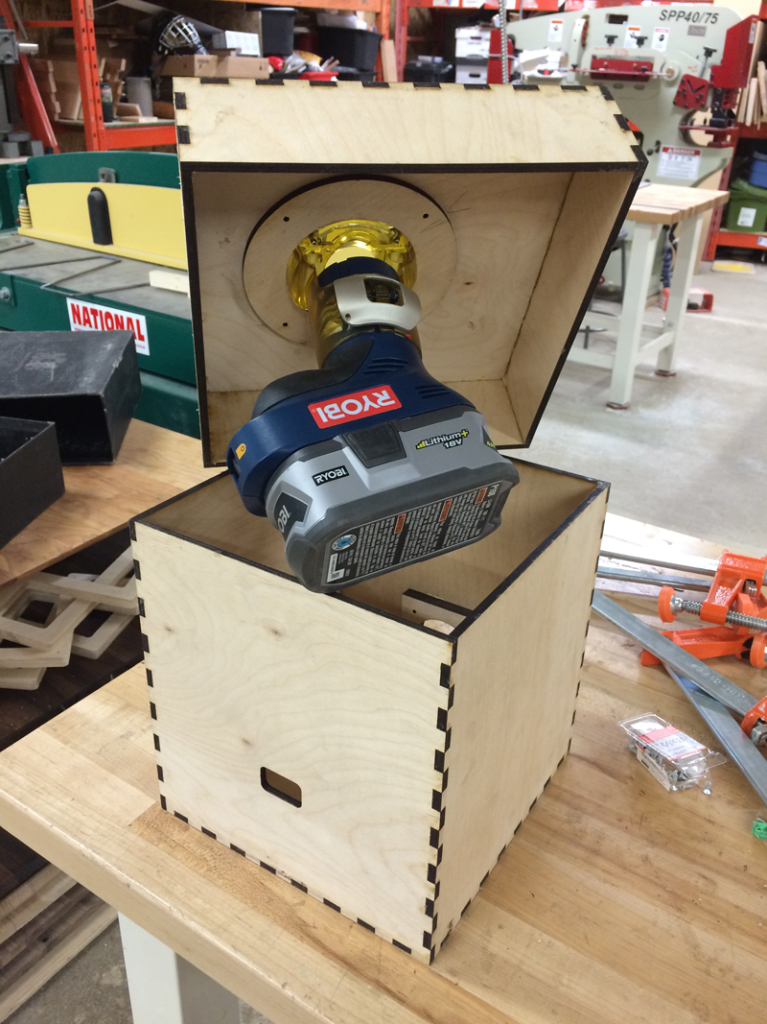 A quick zip on my other router table to cut the edges down and it was time to make a second one. Next to the first box (on the left) is the second box. Like I said, it was 4X faster to make the second one. 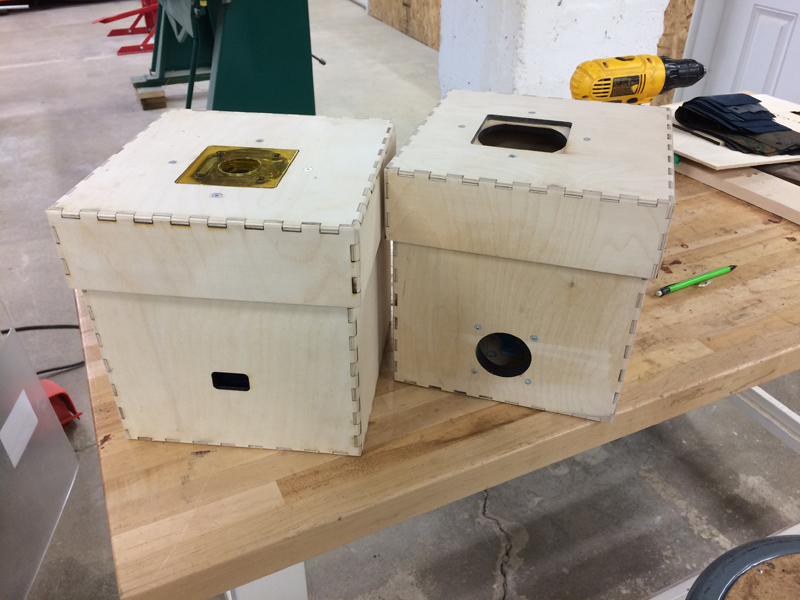 Once the basic form was made up, it was time to address some performance details. First, the switch hole cover. No Metro Made project is complete without the Metro Grade skull. 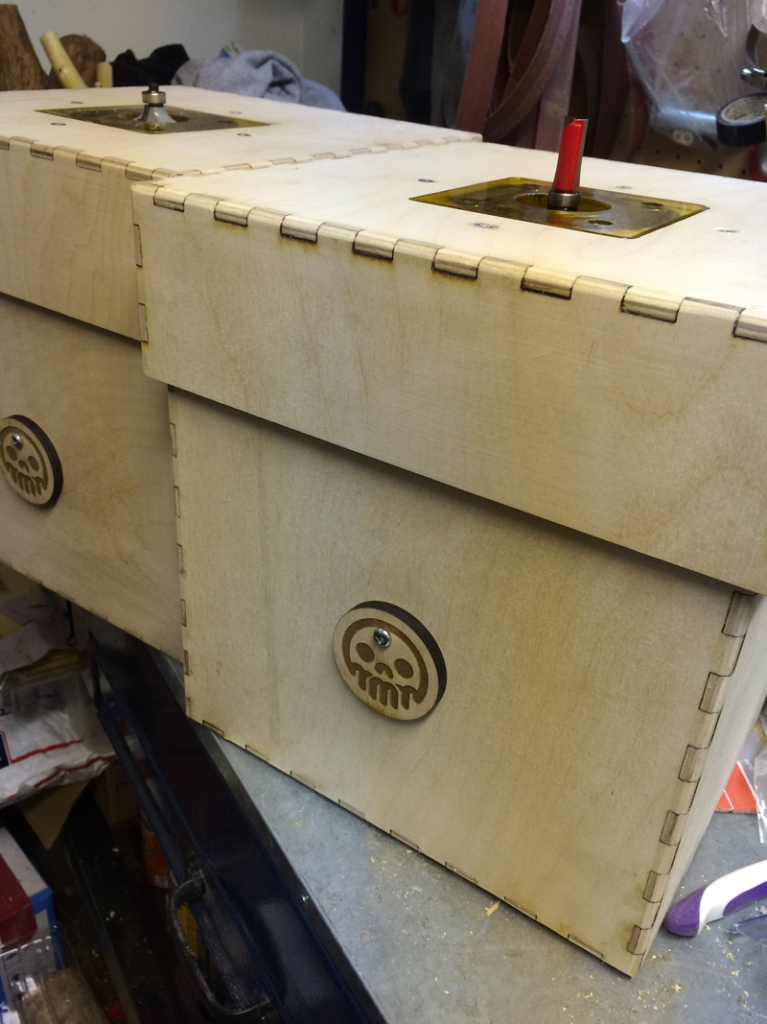 This is simply screwed in place (the hole on the skull plate is bigger to allow for rotation). 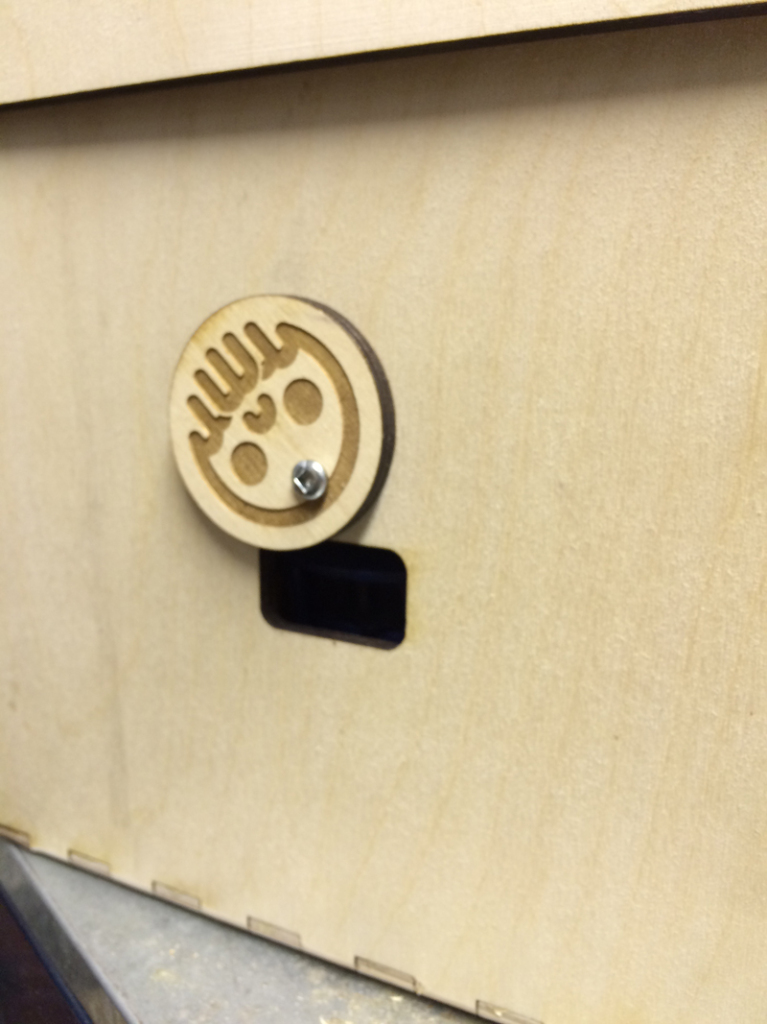 I knew the routers would likely have a lot of vibration and with such a light weight box, it would be amplified. To combat this, two bricks were put inside the box to weight it down and some rubber feet were installed on the bottom to dampen the vibration. This also makes the whole box very sturdy when in use, less fear of it tipping over with the center of mass, well below the table’s surface. 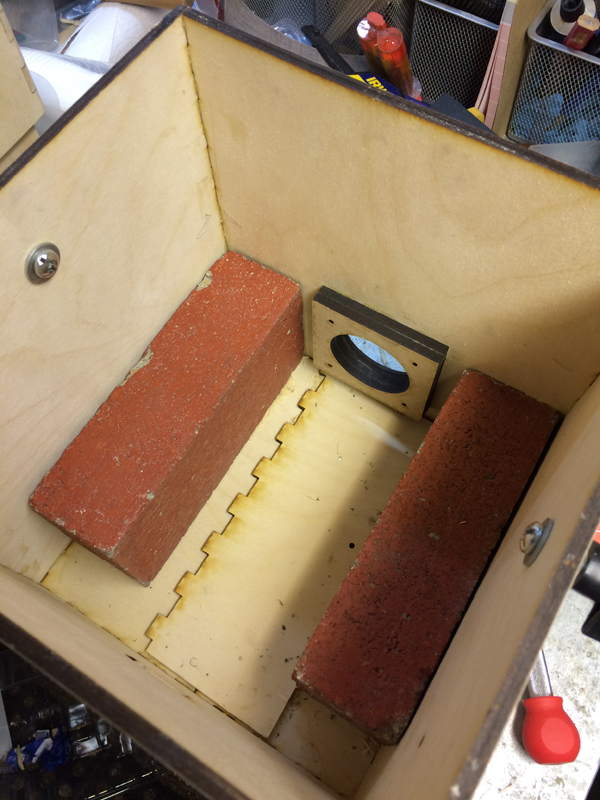 The best part about these boxes is that they are BOXES! which means they are perfect for storing the adjustment tools. I don’t know about you but I have a small collection of cheap tools, so leaving this small 8mm socket wrench and the bit adjusting wrench ready to be used INSIDE the box is great. Some commonly used bits can also be stored inside the box, I have to make sure they are weighed enough so that they won’t get sucked into the dust collector. This is also a good shot of how the dust port looks like, two additional layers of plywood make up the port. 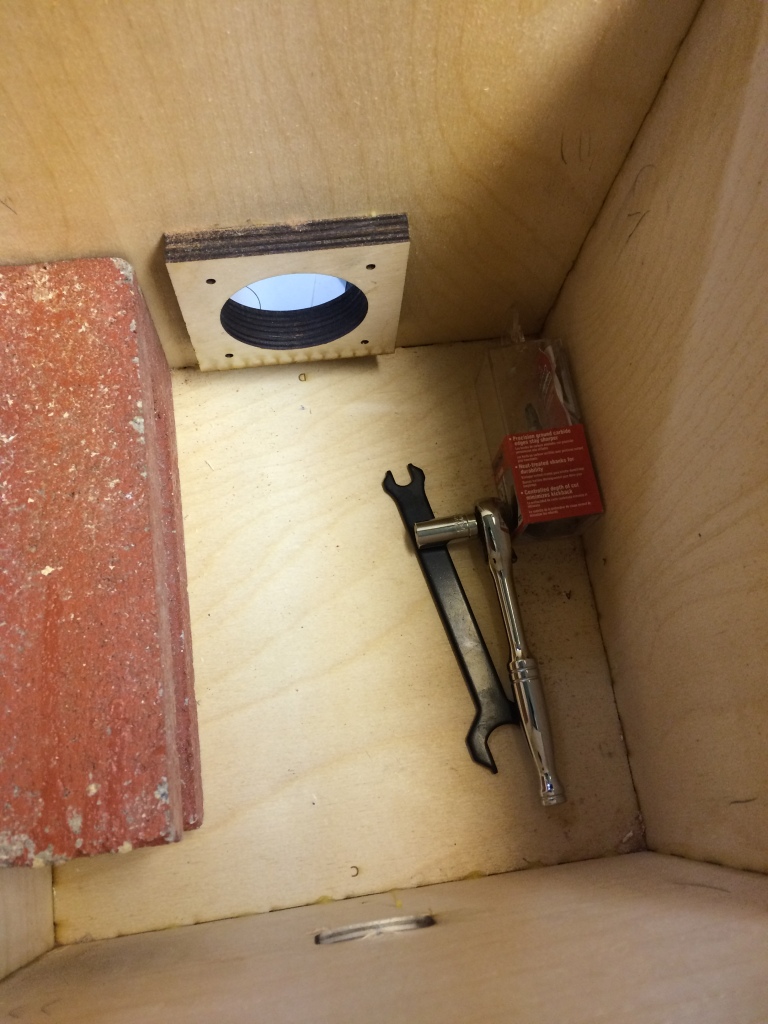 To lock the lid down, I used two 1/4-20 bolts with a flower knobs on either side that correspond to two slots cut out of the lid. 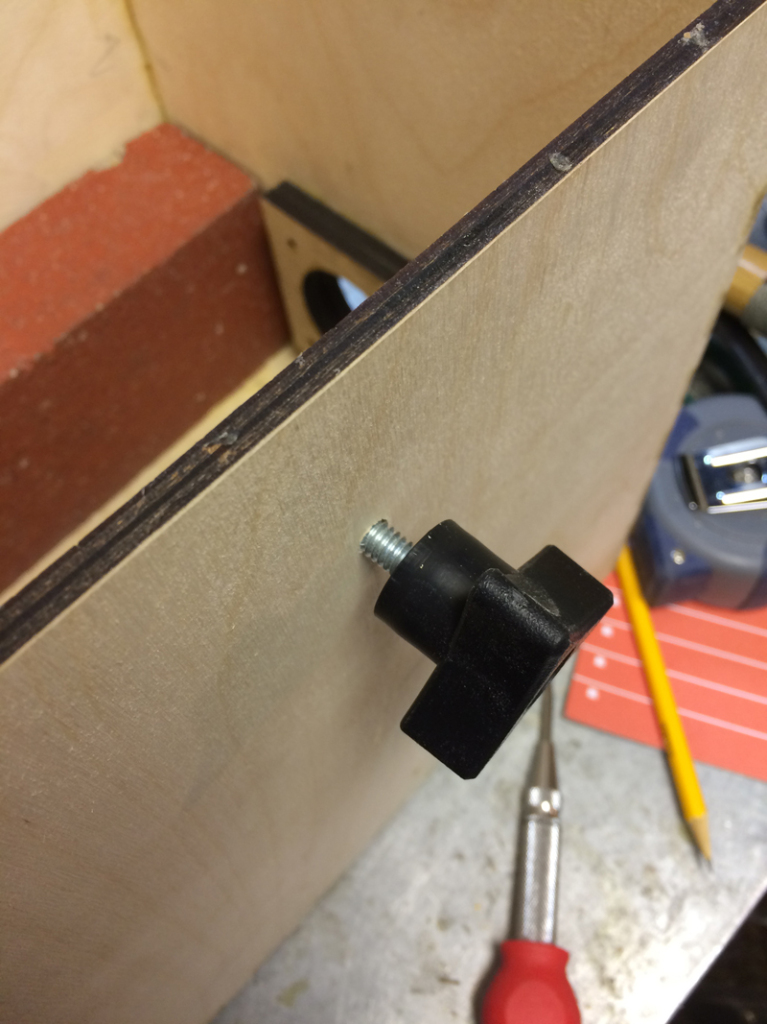 Here are the slots. On the underside of the lid, on the inner corners, a thin 1mm cork strip was glued in place to increase the contact of the lid and the box. This should dampen the vibration more and also make for a better airtight seal. 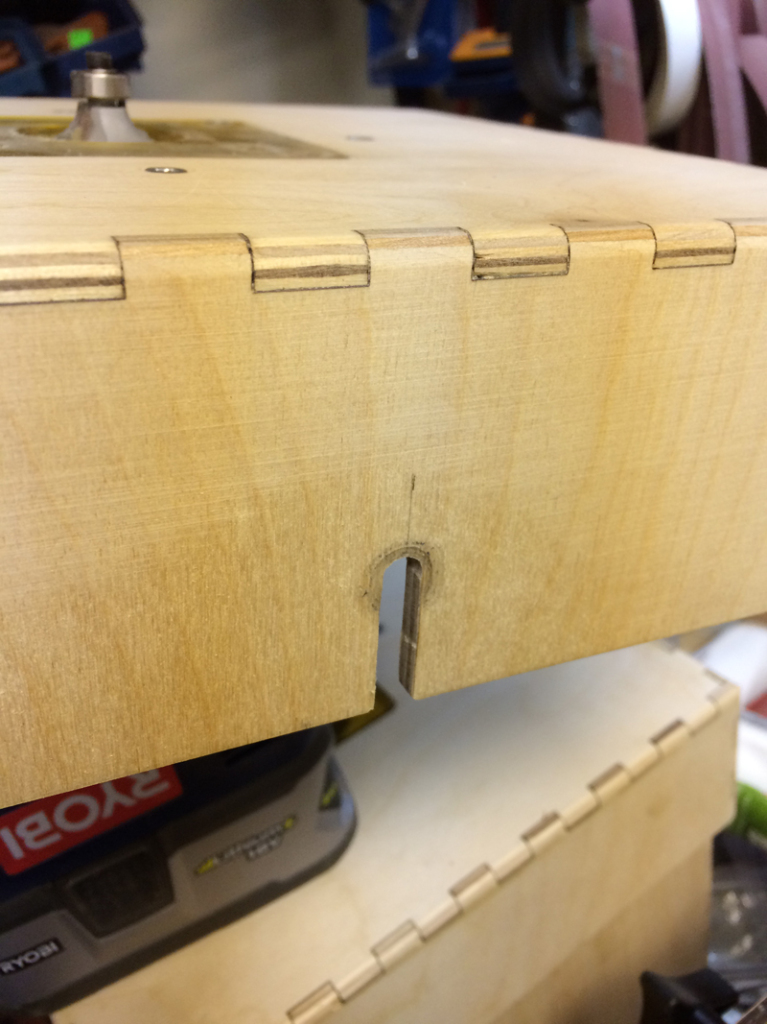 The surface of the router plate was TOO slick so some 220 grit sandpaper took off the sheen and added a bit of traction for better control. 4 additional screws were added to the router to really suck down the router base surface to the box lid. 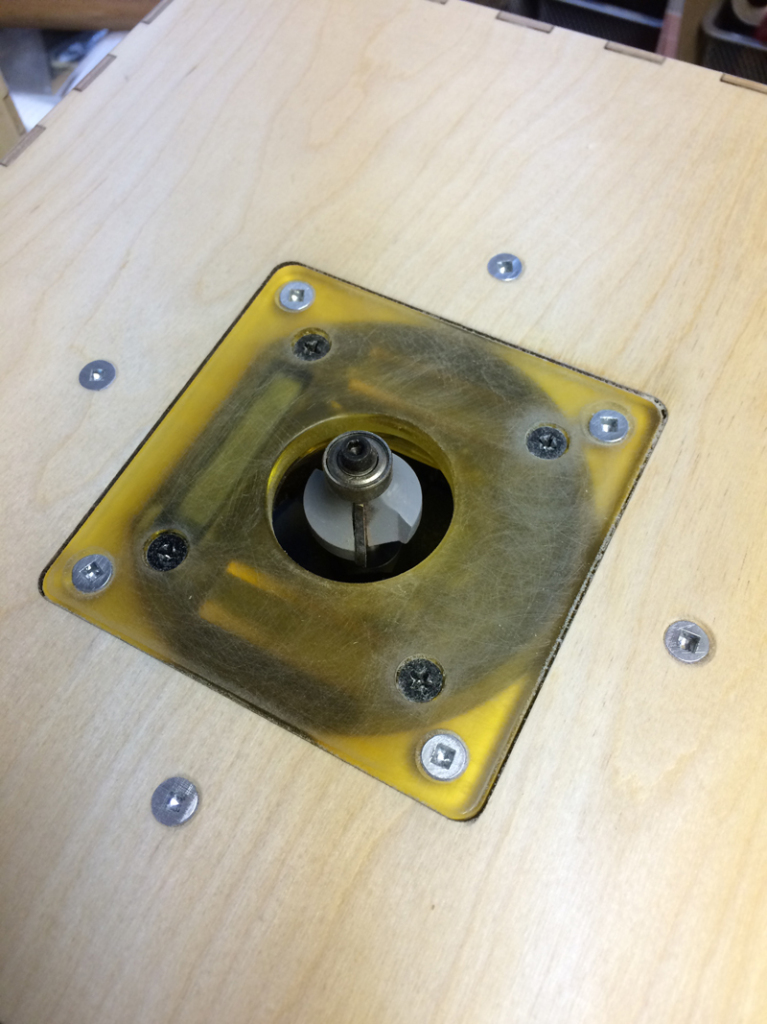 One final shot of the dust port. 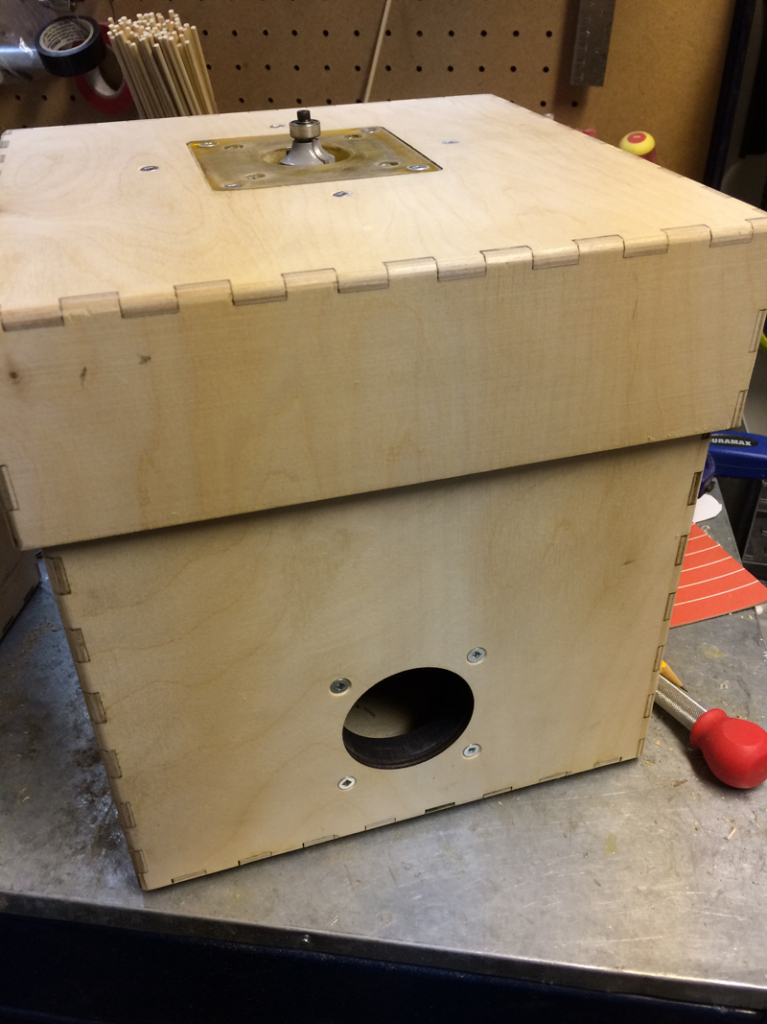 The first box will be set up with a 1/4″ round over bit almost exclusively so the 2nd box needed a few more details to make it more versatile. Aside from being a flush trim box, it will also be the box I use to cut band groove slots on the tips of slingshots. I have to buy a 1/8″ and a 3/16″ core box bits, but the idea here is that the swinging arm will pivot on one end to increase or decrease the distance from the bit and act as a fence for the slingshot to ride on. The free swinging end gets clamped down by a quick clamp. When I figure out the idea distances to swing it, I’ll make some indexing pins to easily repeat the cut. 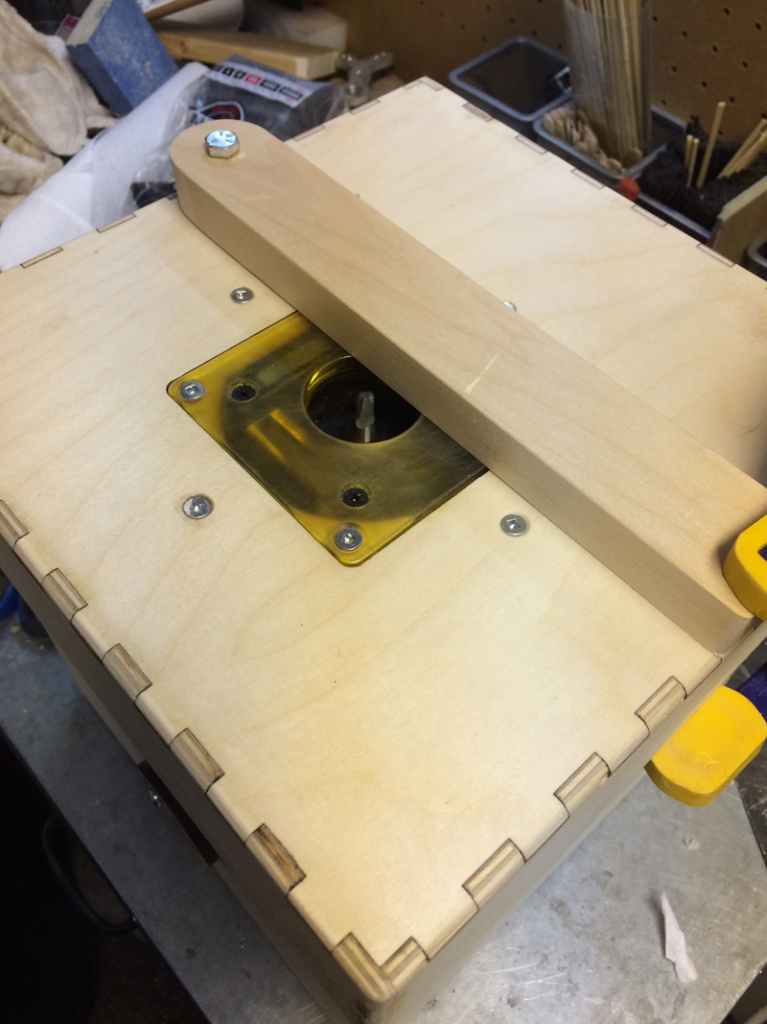 Now to install it in the shop. This whole project was spurred when I found this amazing cabinet at my local Re-Store (Habitat for Humanity) for $15. I think it was used as an mail inbox unit, obviously part of a larger installation due to the unfinished sides, it’s very sturdy. I put some medium duty casters just so I can move it around, but when I am using it, I have it blocked up in the front.

It is the PERFECT thing for organizing my thin woods and smaller blocks of lumber. 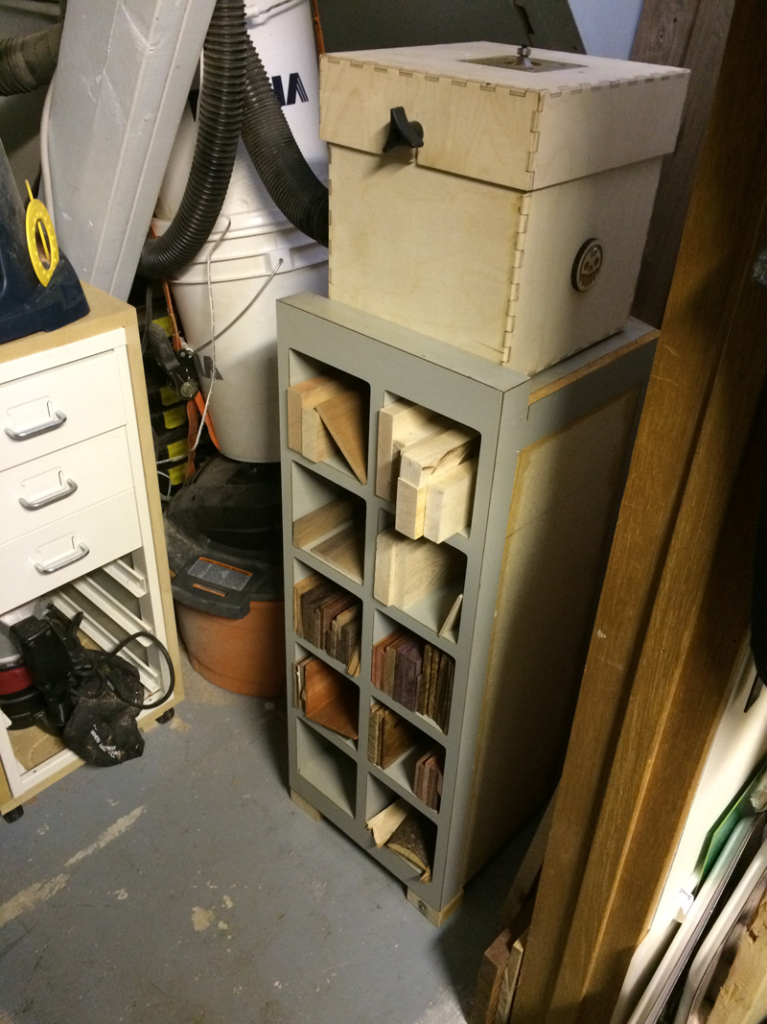 The cabinet had a lip on the top side, which I actually think was the bottom, which is nice for the router box to rest up against. I freed up the area in front of the wood storage by moving the small blocks to the new cabinet. There is just enough space to get behind there and get the larger planks of stock. The modular boxes allow me to move the whole unit off the base and then move the other box into its place, no need to spend time changing bits. 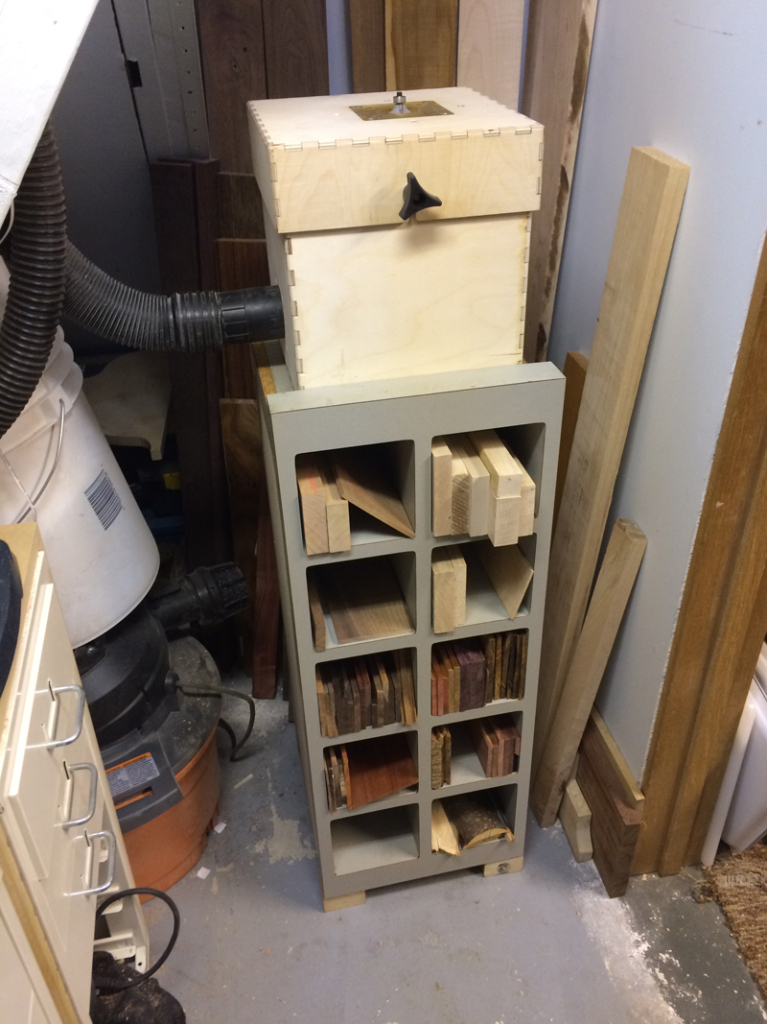 I know I’ve gone on and on about the dust port but router make such a mess if you don’t control them. 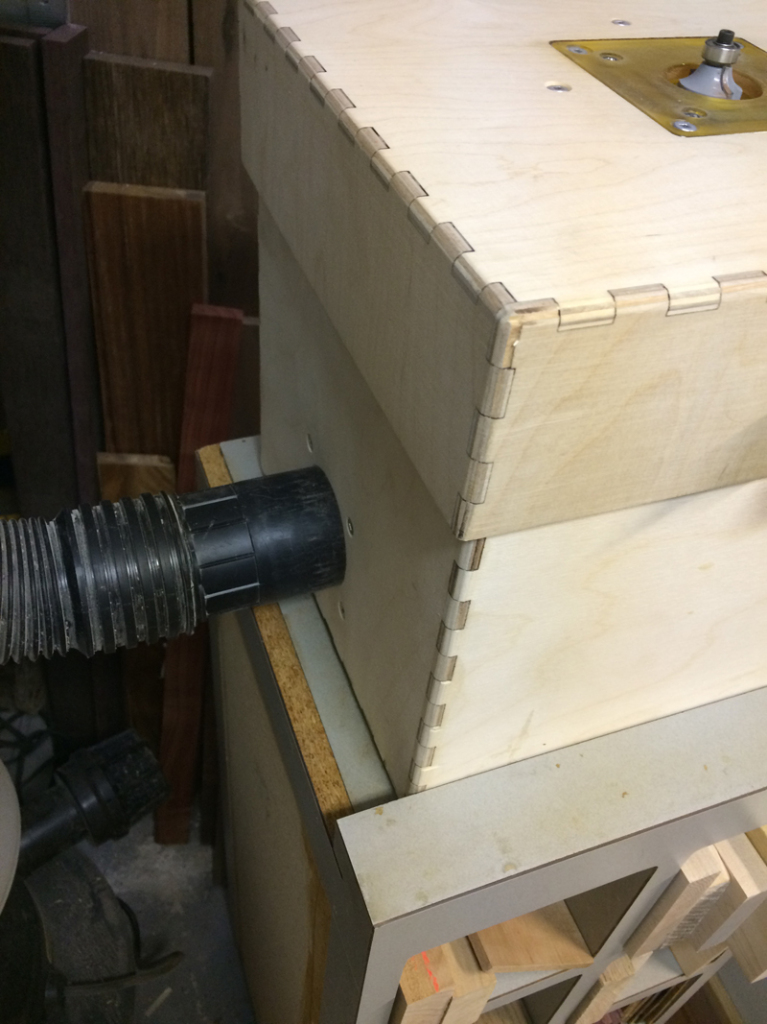 So to close this Metro Made up, a short video of the first run on the router box. I hadn’t installed it on the base.

To celebrate the finish of these boxes, I made this Blood Orange Tyton with it. The smooth radius courtesy of the 1/4″ round over bit. 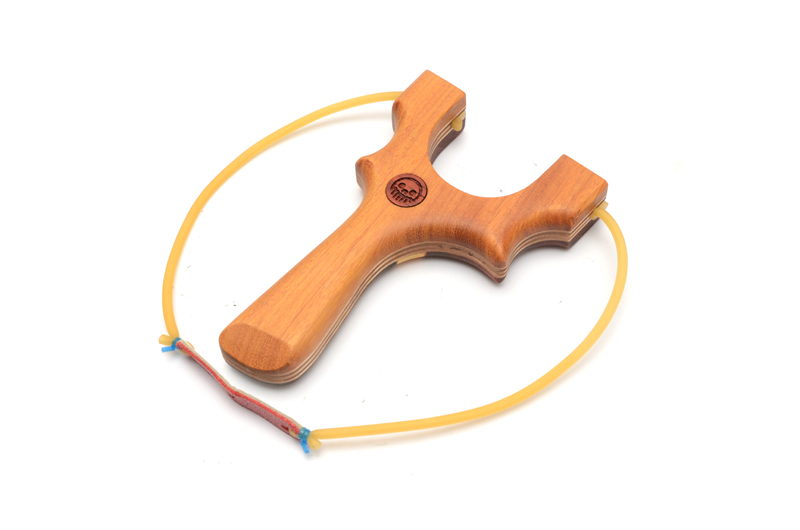 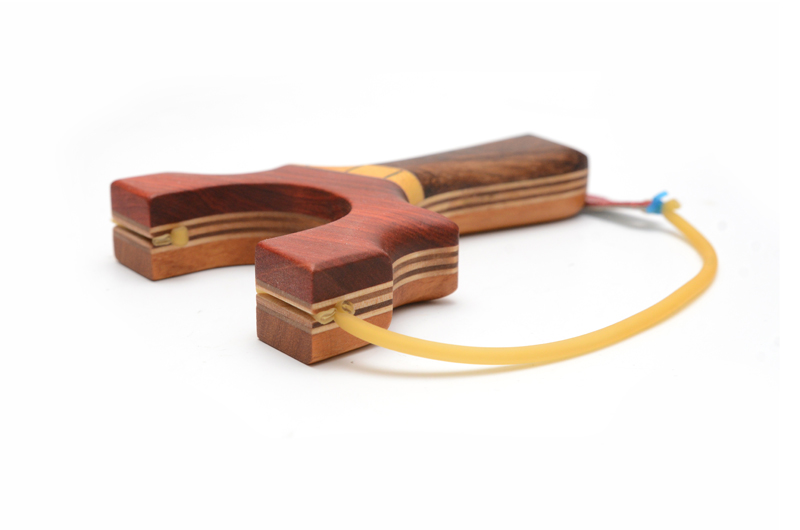 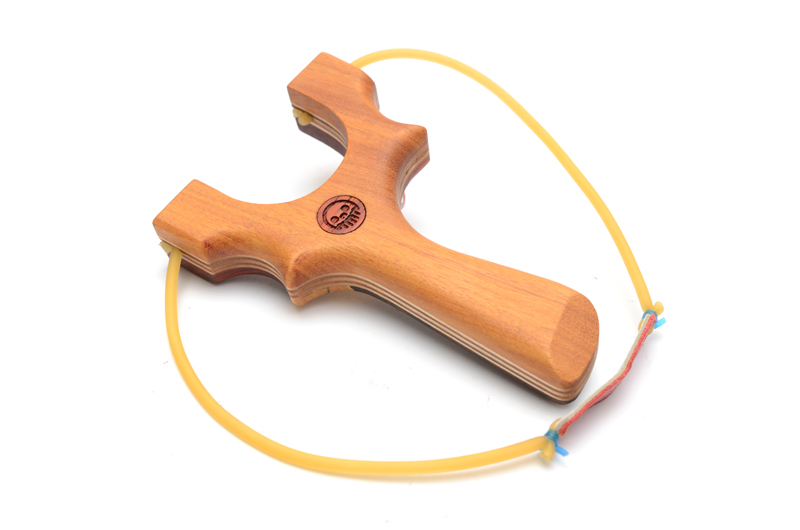 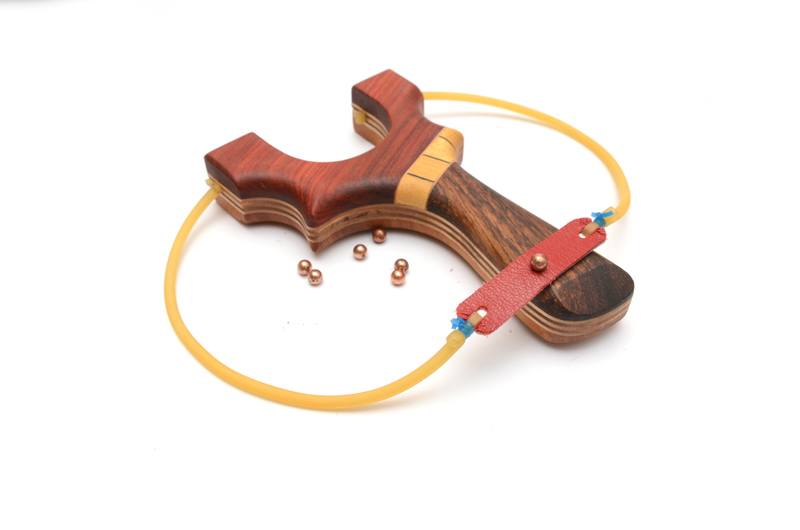 Thanks for reading and have a superb holiday season!