I know don’t know who thought of this first but it was pretty neat. I recently bought a couple of these figure 8’s with the idea that I could do the same, but I just couldn’t bring myself to just wrap flat bands on it. I finally got to making my own figure 8 slinger, this is how.

Most often, aluminum climbing descender figure 8 slingshots are made simply by cutting the larger ring in half and then wrapping some flat bands on the top. I don’t really like OTT (Over The Top) slingshots and still much prefer TTF (Through The Fork), I also have been getting back into tube shooting for ease of use and the quiet release sound.

The figure 8 descenders are used in climbing and repelling as a means to slow down the rope via friction. They have since been retiree to just controlling gear and less humans but they are still used in climbing. They are mostly made from aluminum with some steel varieties. They are sized perfectly for the hand and as recent history has prooven, they make great slingshots.

Here’s how I made mine.

Lets start with cutting the larger ring, not quite in half but close. A metal chop saw makes short work of this step. 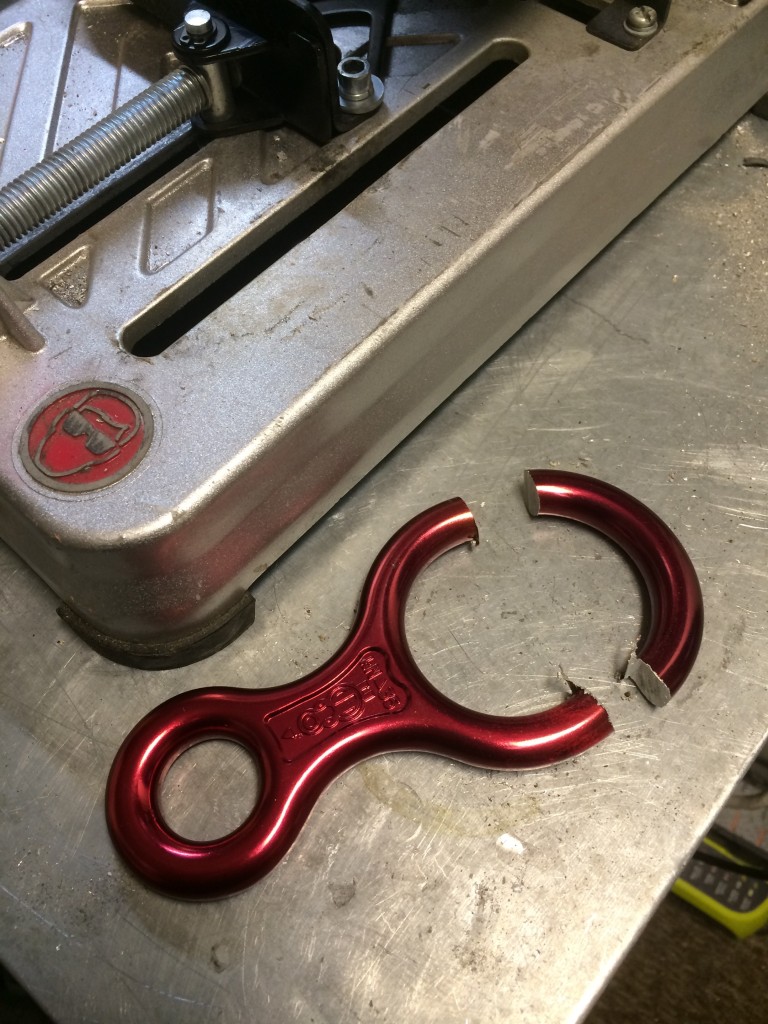 The edges are ragged and uneven, so a disc sander and a belt sander trues up the ends. These will become the fork tips. At this point, some would stop here after some rounding of the tips, band some Theraband to it and call it day. 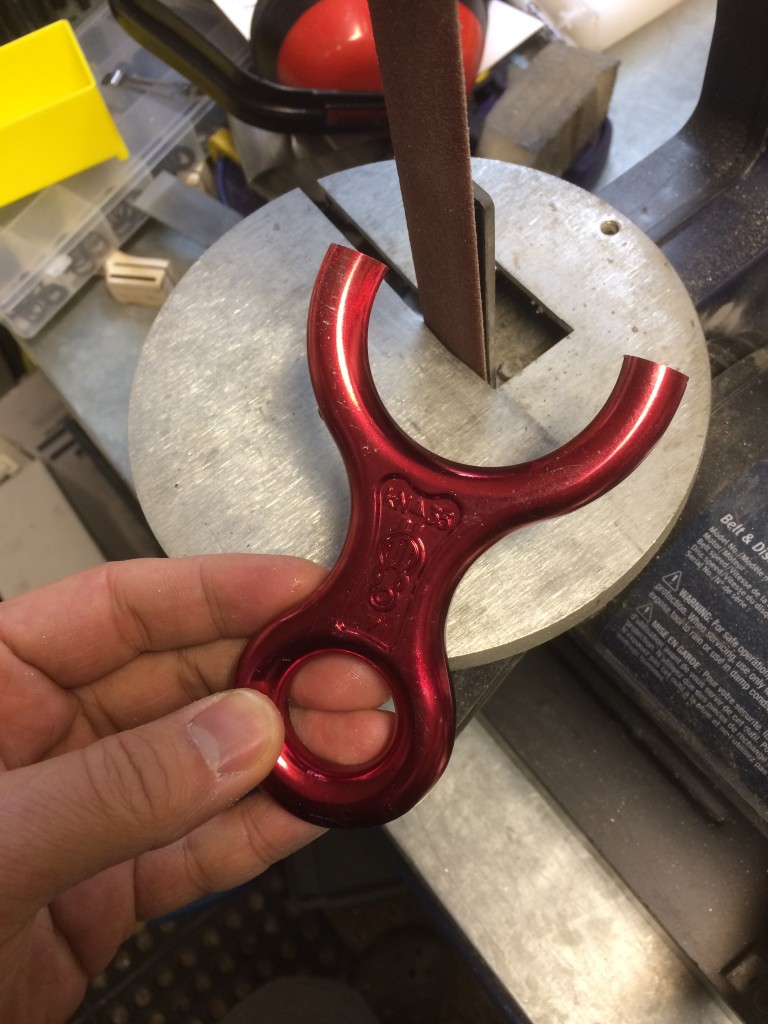 Having never seen a version of this kind of slingshot that can shoot rubber tubes, I decided to venture down that road. I scribed the centres of the tips and drill the holes out to 7/32″ and finish with a chamber bit to knock down the edges of the hole. Rubber doesn’t like edges. My mill’s vice is only so big so when I want to clamp something larger, like this slingshot, I use two quick clamps to apply even pressure on the object with in the vice. 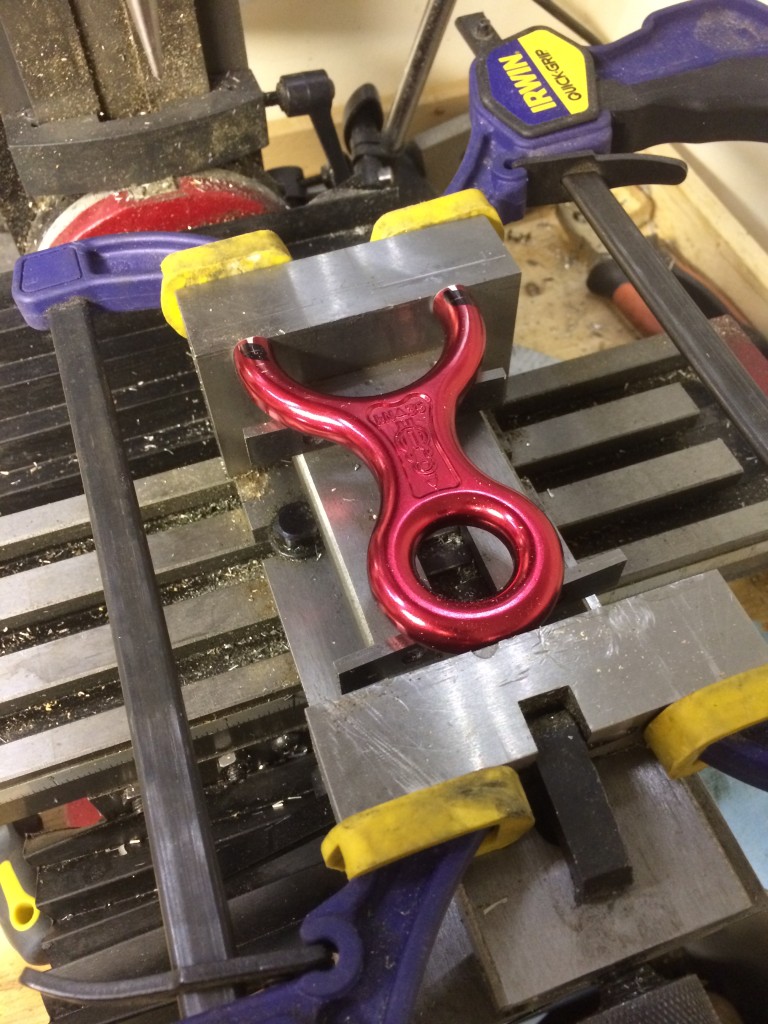 A couple of quick process images and few test shots with a set of bands. Not quite done yet… 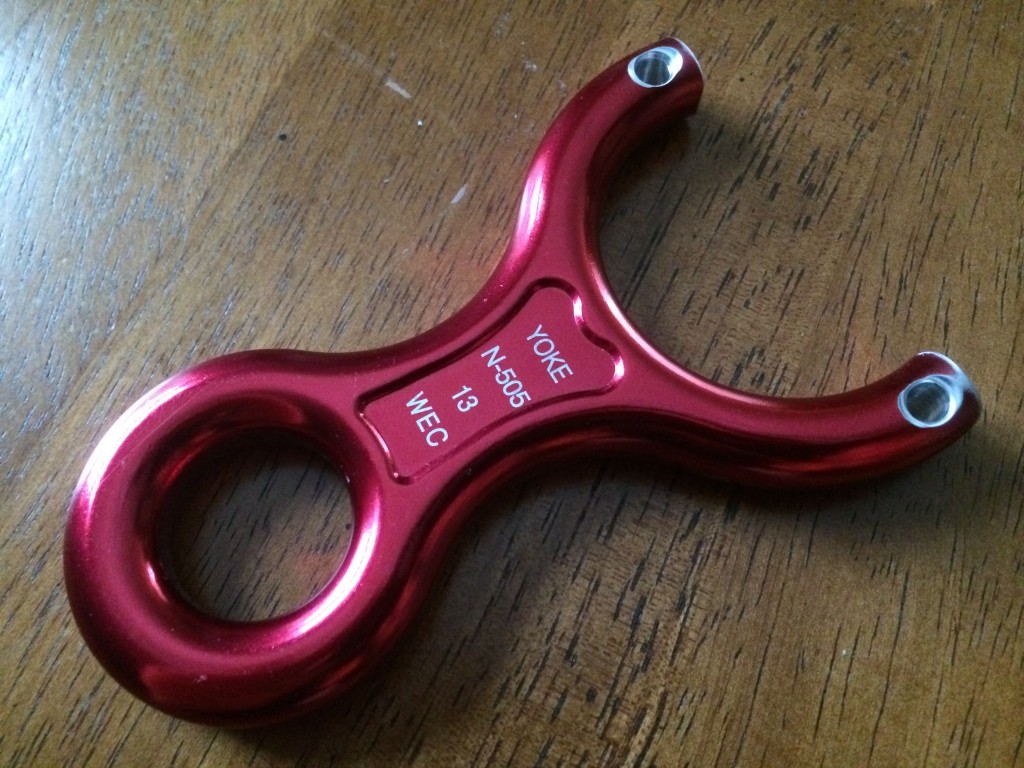 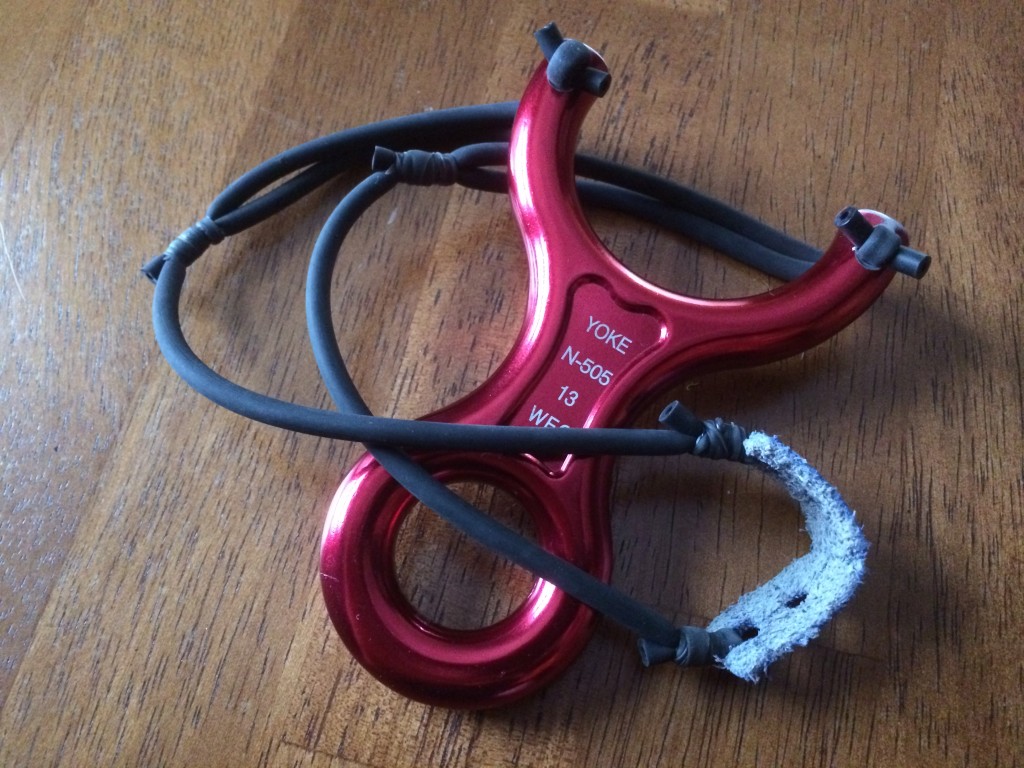 The smooth anodized aluminum is quite slippery so the next steps address this as well some aesthetic concerns. Body of the slingshot is masked with tape so the vice would not mar the finish. Then the tips of the forks are sanded with a nail file to remove the anodizing. 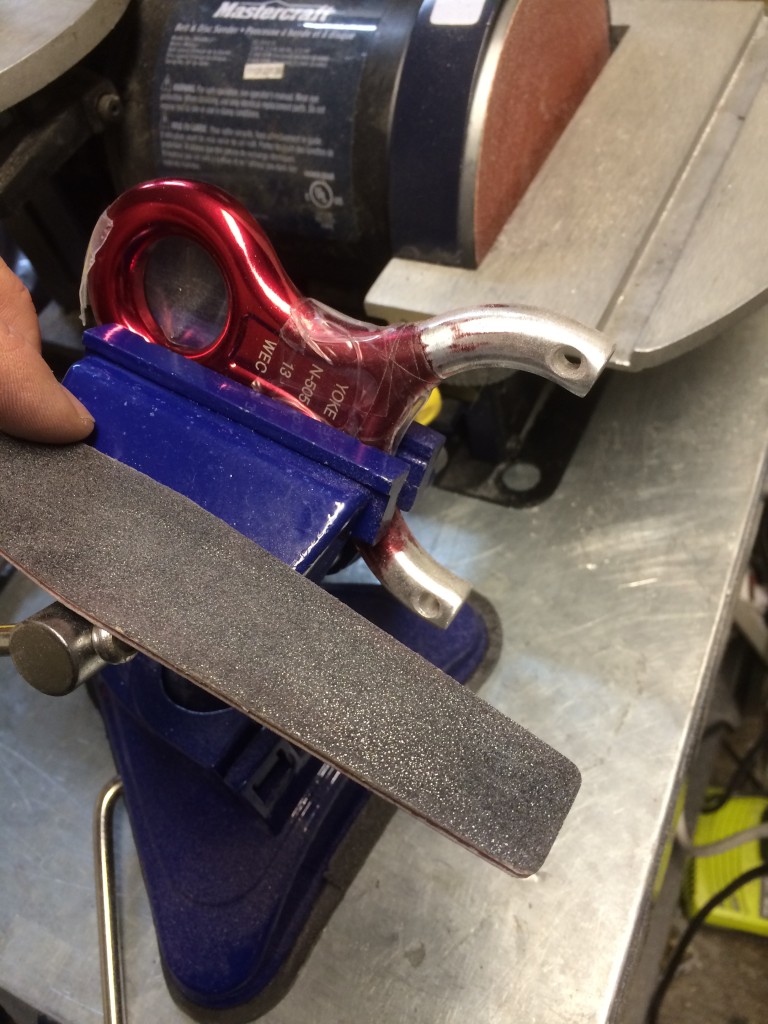 After the rough sanding was done, a Scotcb-brite drum wheel was used to knock down all the scuffs. It’s at this step that I decide that this slingshot will be name the 505 Yoke, as it’s emblazoned on it. 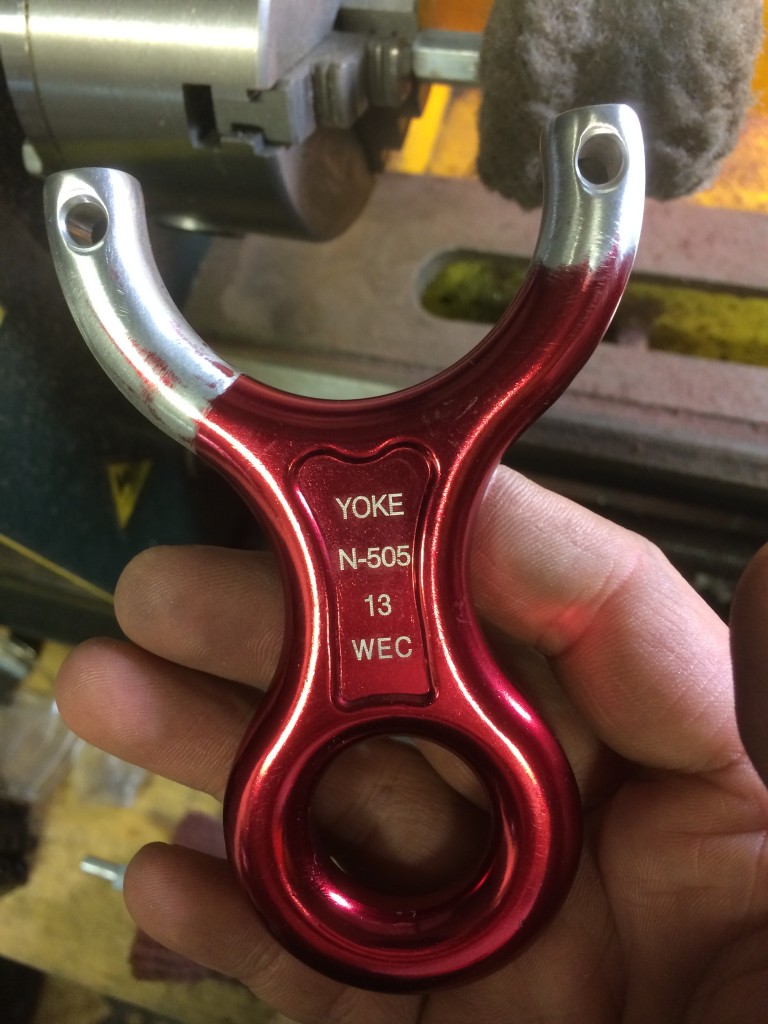 Then some diamond compound polishing with a felt cone. Shiny! 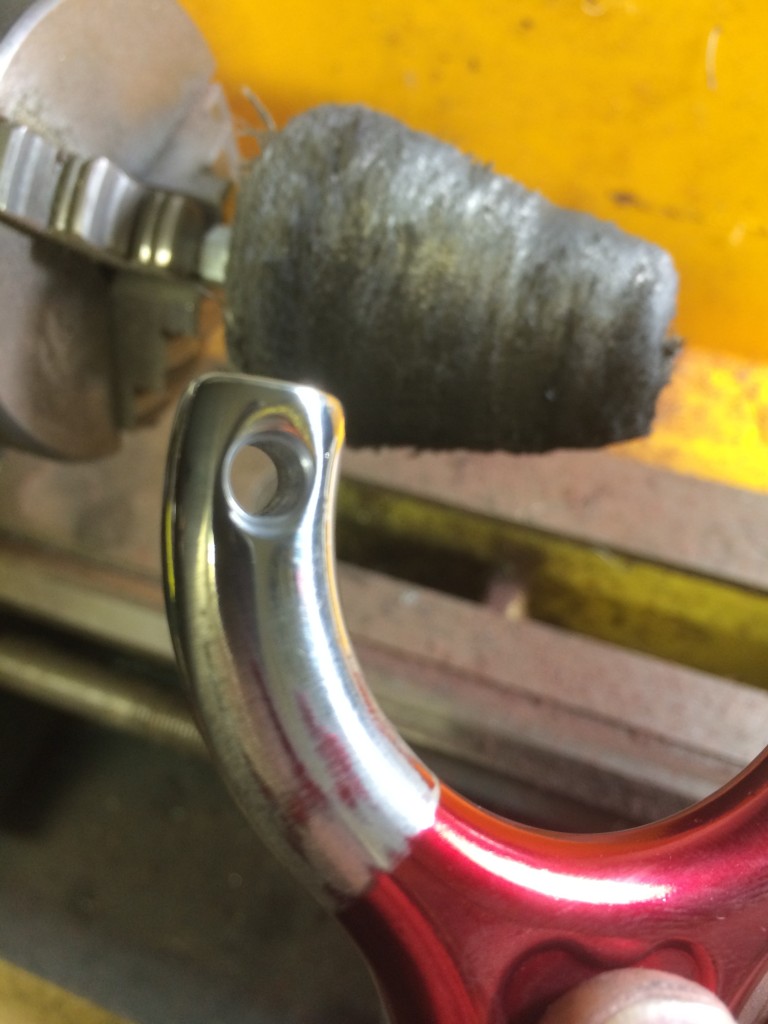 After a painfully slow process, some black 5080 rubber tubing was slid onto the forks so that the aforementioned slipperiness is eliminated. 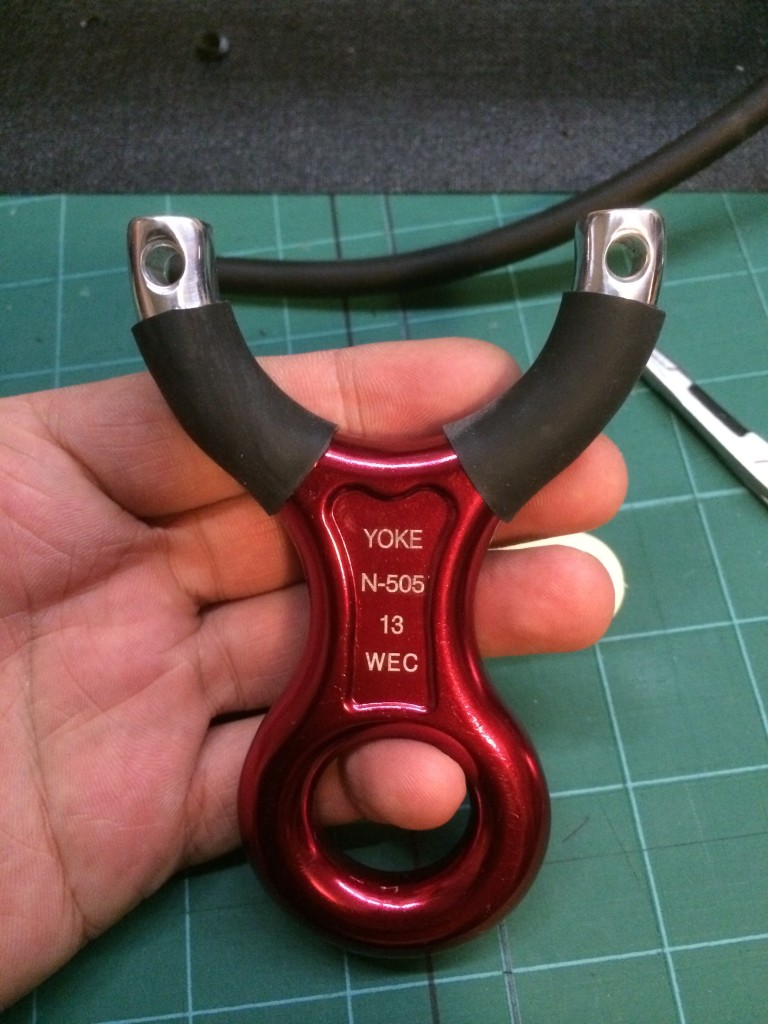 The 505 Yoke is essentially done, just needs some bands. 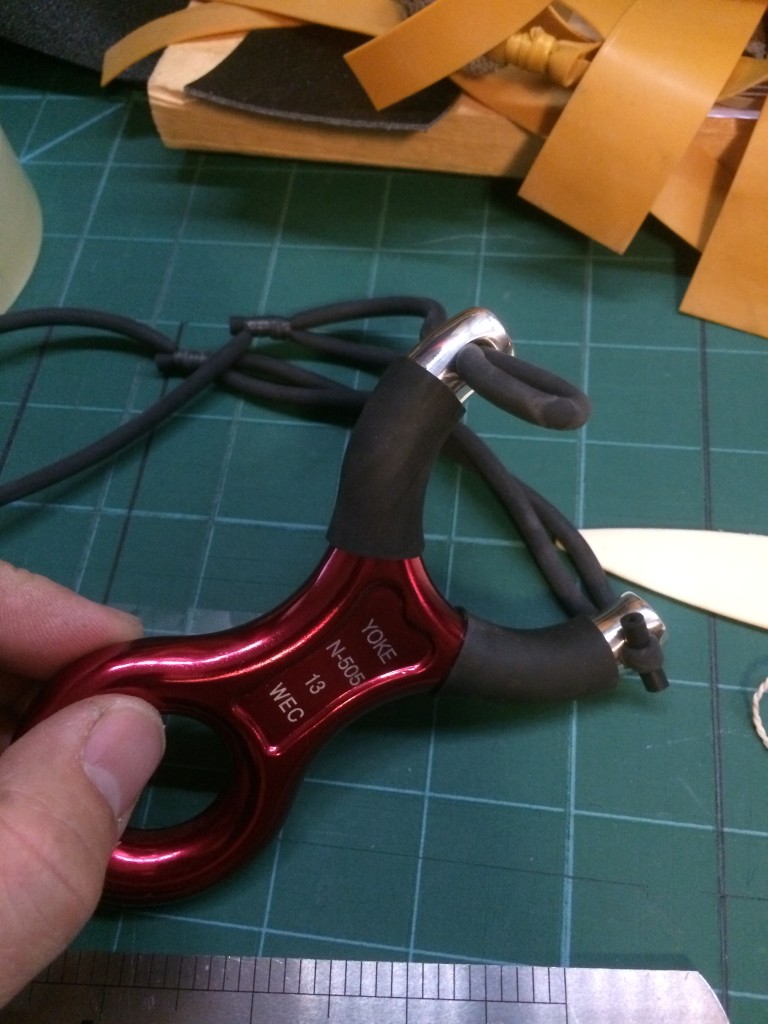 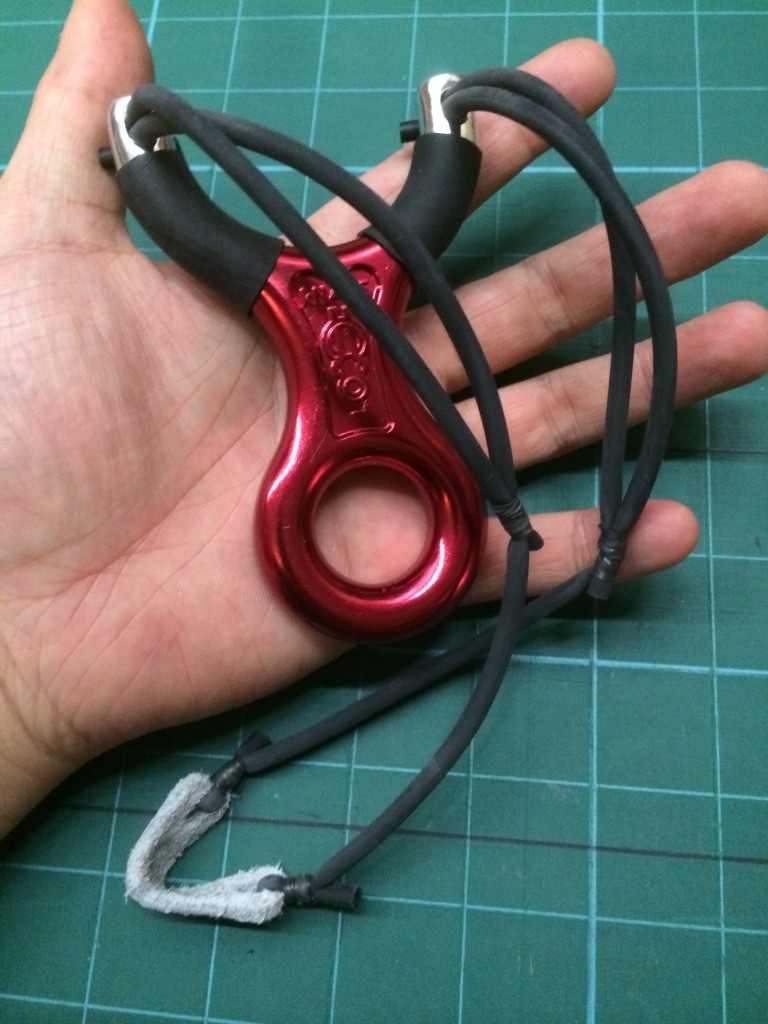 Of course, no slingshot project at Metro Grade Goods is complete without a trip to the Photoshop. 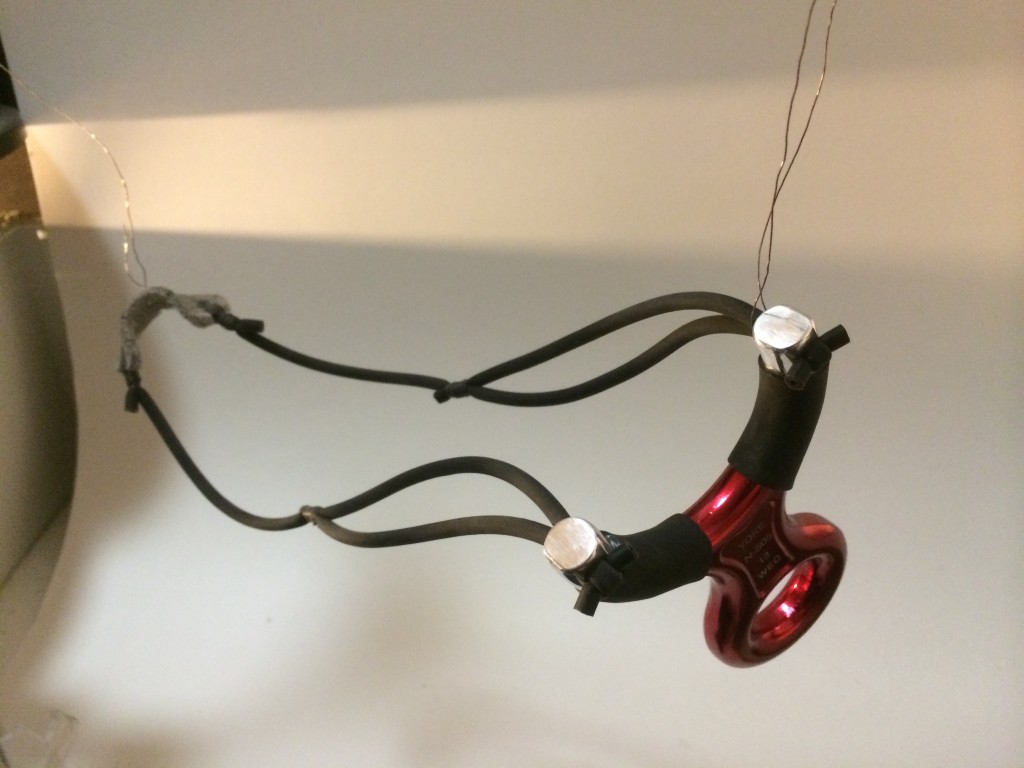 Then some actual Photoshopping. 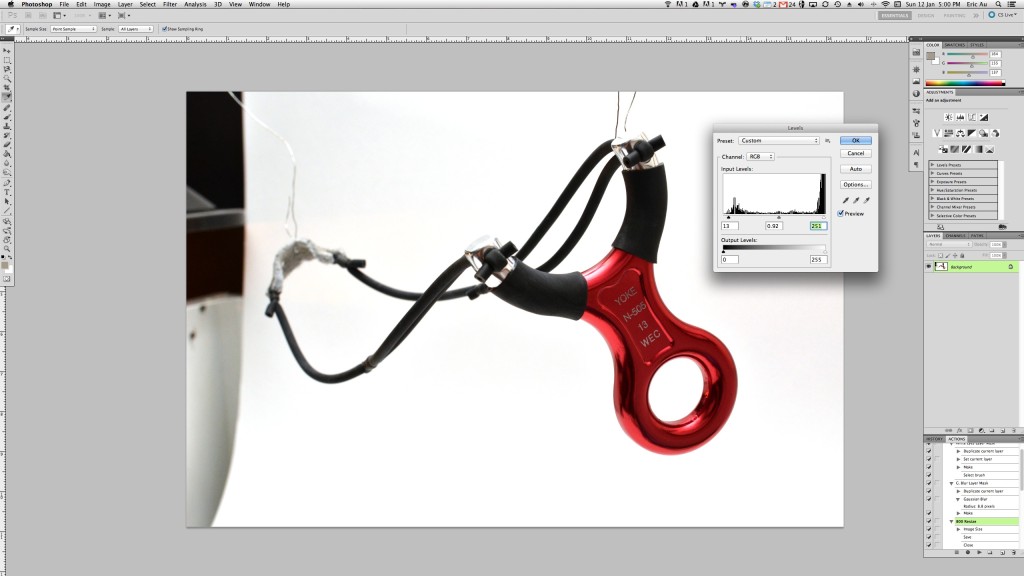 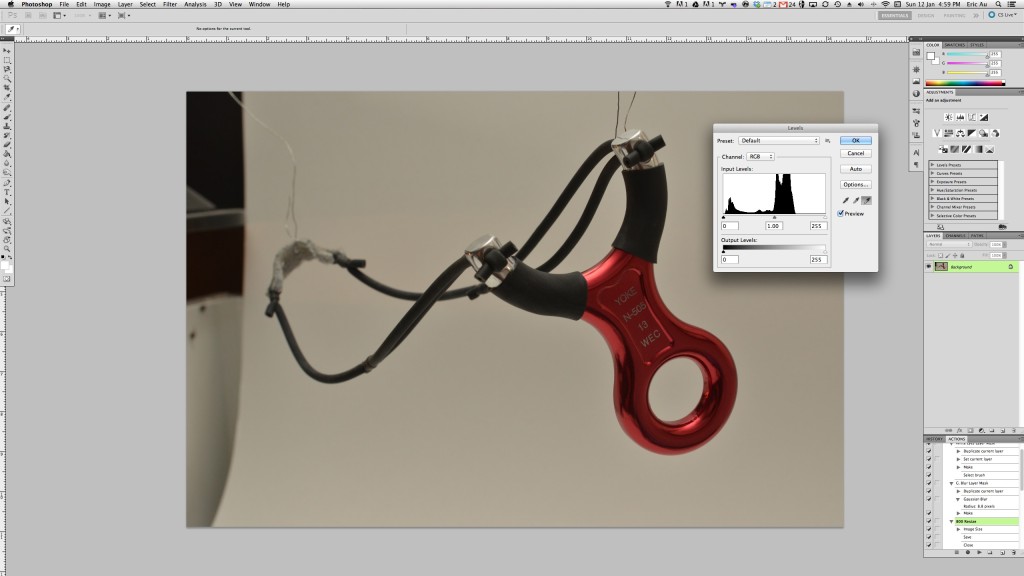 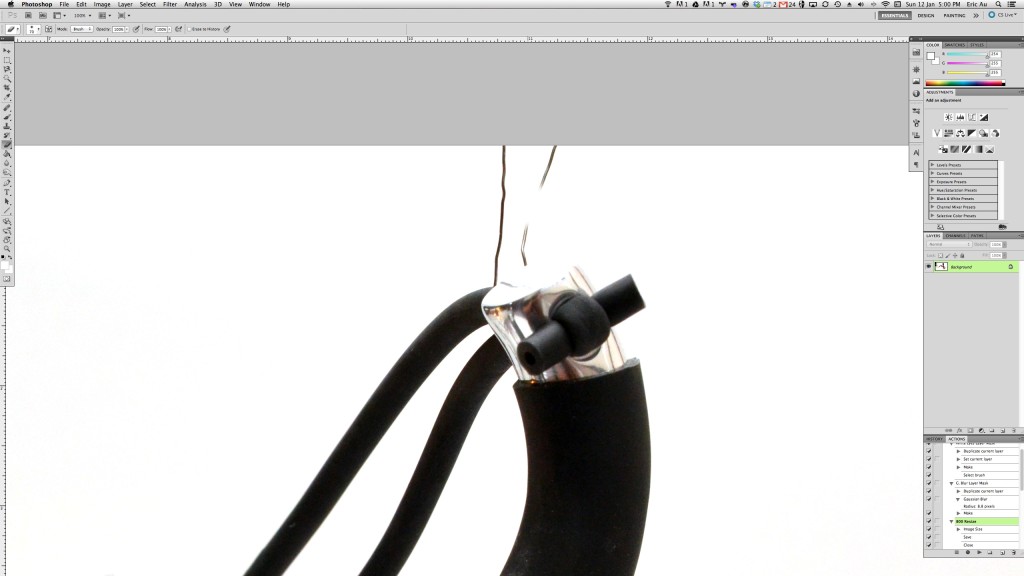 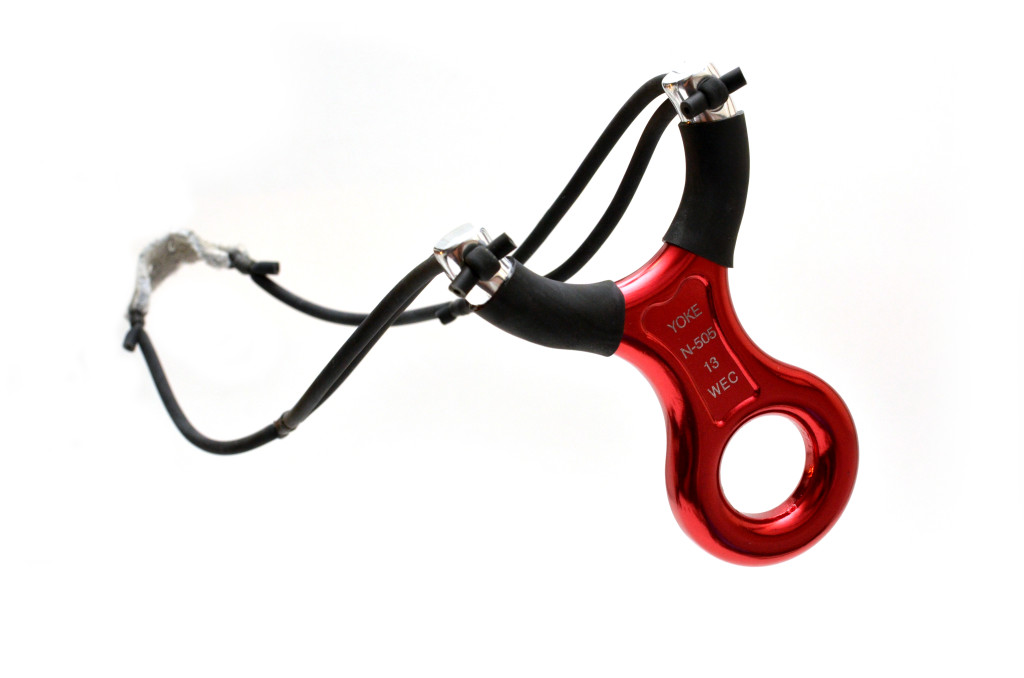 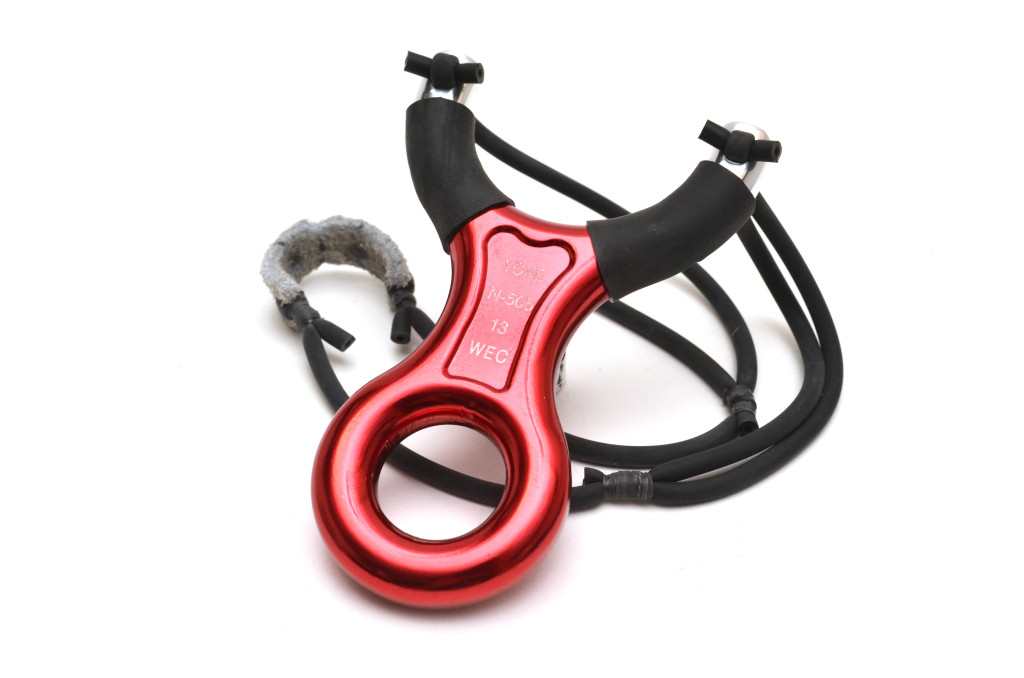 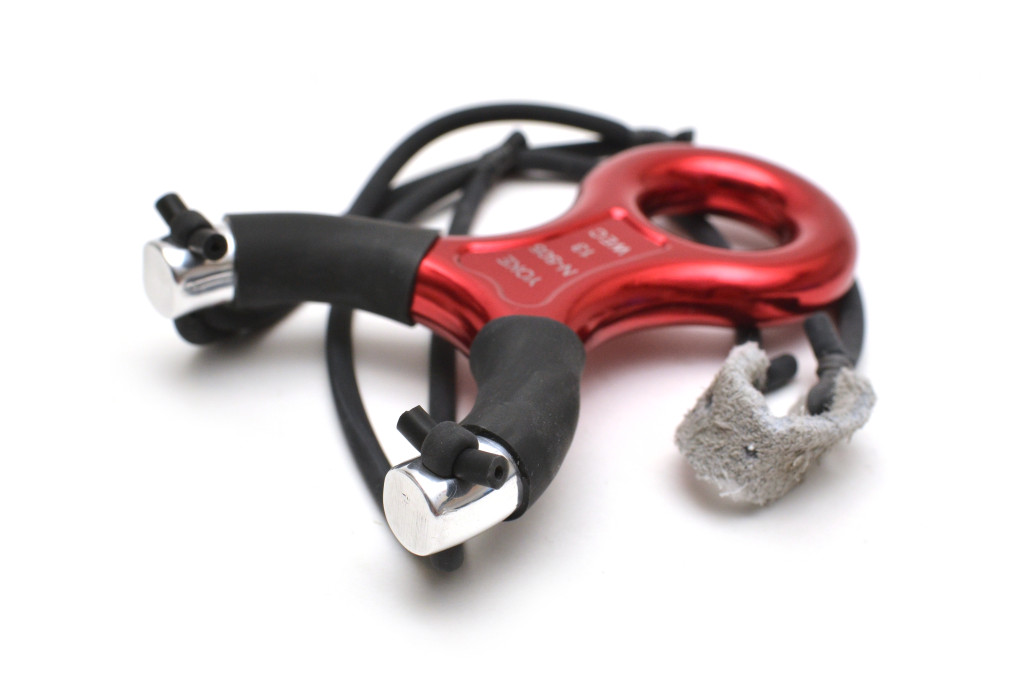 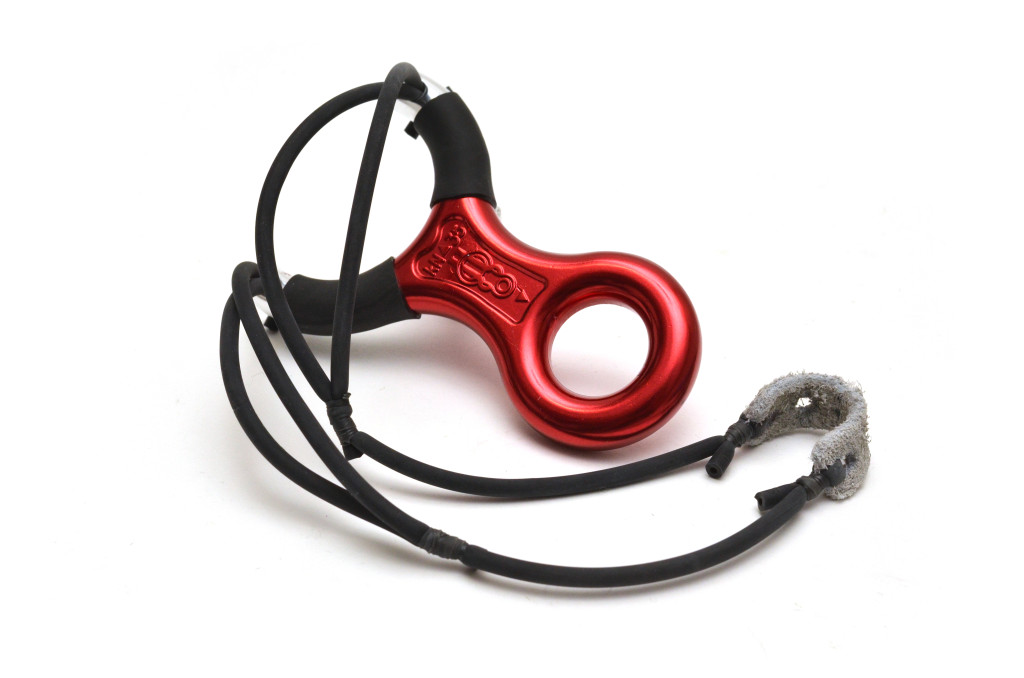 Thanks for reading another Metro Made post, it’s always fun to share and learn along the way.

I still have 2 more of these figure 8’s..maybe you’ll see one on the shop.

6 Responses to “Metro Made | The 505 Yoke aluminum slingshot”