I recently bought a new Chinese cast aluminum slingshot called the Tiger Scorpion, while the attachment system wasn’t new (I have a few frames with the same style tip), the shape was kind of neat.

So I banded it up with some bb tubes and played around with shooting it..it was neat! I had set it up with a single tube with a ball in the tube end, then after one particular shot, the single tube slipped into the big hole as well as the small hole….bling..lightbulb. I quickly undid the bands and ‘wormed’ it through both the big and small holes, terminating at the small hole. Kind of like the Wave attachment. 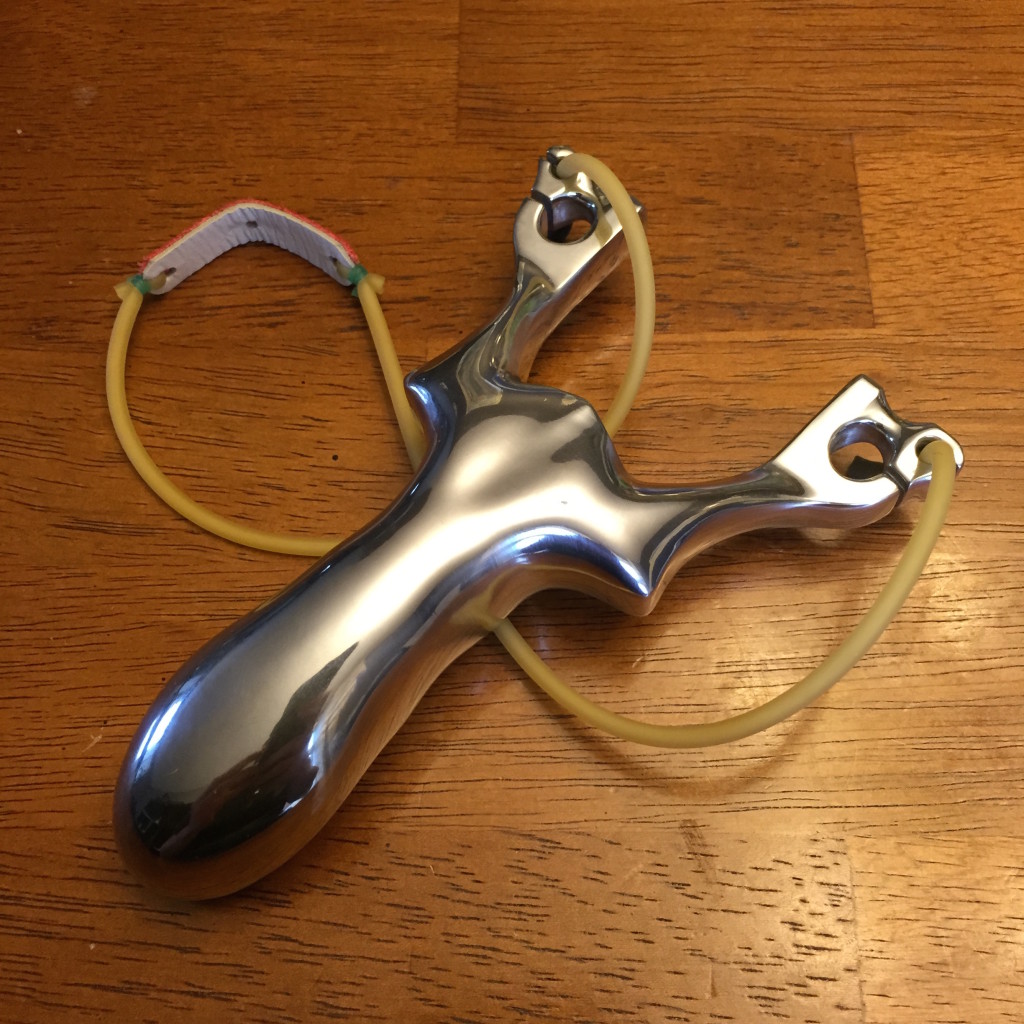 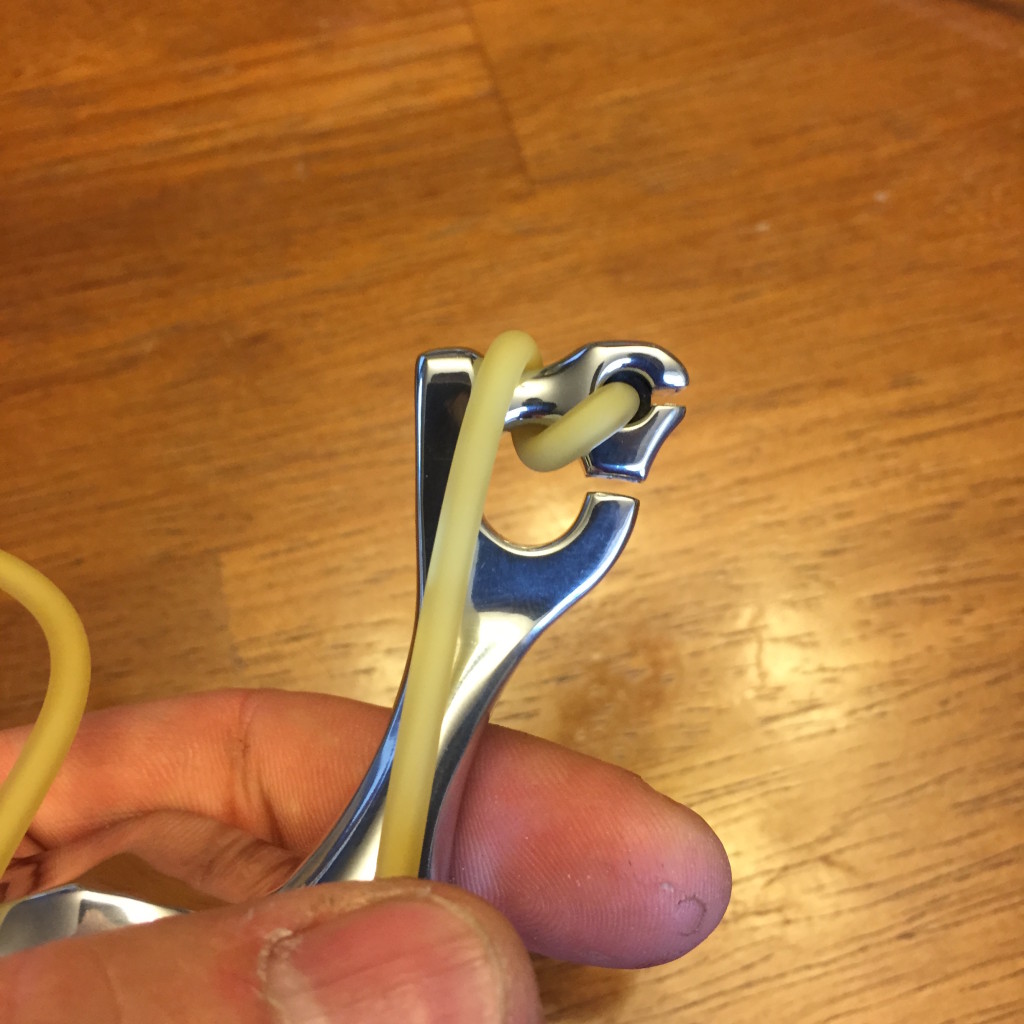 Boom, instant OTT single tube attachment…this got me thinking..the Tiger Scorpion, while cool, wasn’t 100% what I liked. What I do like is my Tyton. I have practically packed up everything to send to Peppermack of Cracked Pepper Cataplts, so when the urge and inspiration hit…I was nearly devastated, BUT I have never been so happy to have found two extra cores in my shop.

I took my digital file of the plain tipped Tyton frames I got cut for modding and discovered that there would be room for a big and small hole set up like the Tiger Scorpion, but what I wanted to do was make the smaller hole, even smaller than it was on the T/S so it would be more of a friction fit with no ball in tube needed. Thus the Wormhole attachment was born, and the namesake for this slingshot, the lumbricus terrestris: an earthworm.

I started by gluing up two plain tipped Tyton frames with a blue spacer in the middle. I pinned the top two pin holes with aluminum and peened them into place before flush sanding the face.

I layed out the new hole patterns, a big 5/16 and a smaller 3/32, with connecting channels to the outside of the fork tips. This would allow for single tubes or looped tubes if I fancied it. From there, I shaped the tips till they were rounded and a divot was filed into the top of the tips to center the bands. I also shaped the finger and thumb grooves like my other Tyton mods. 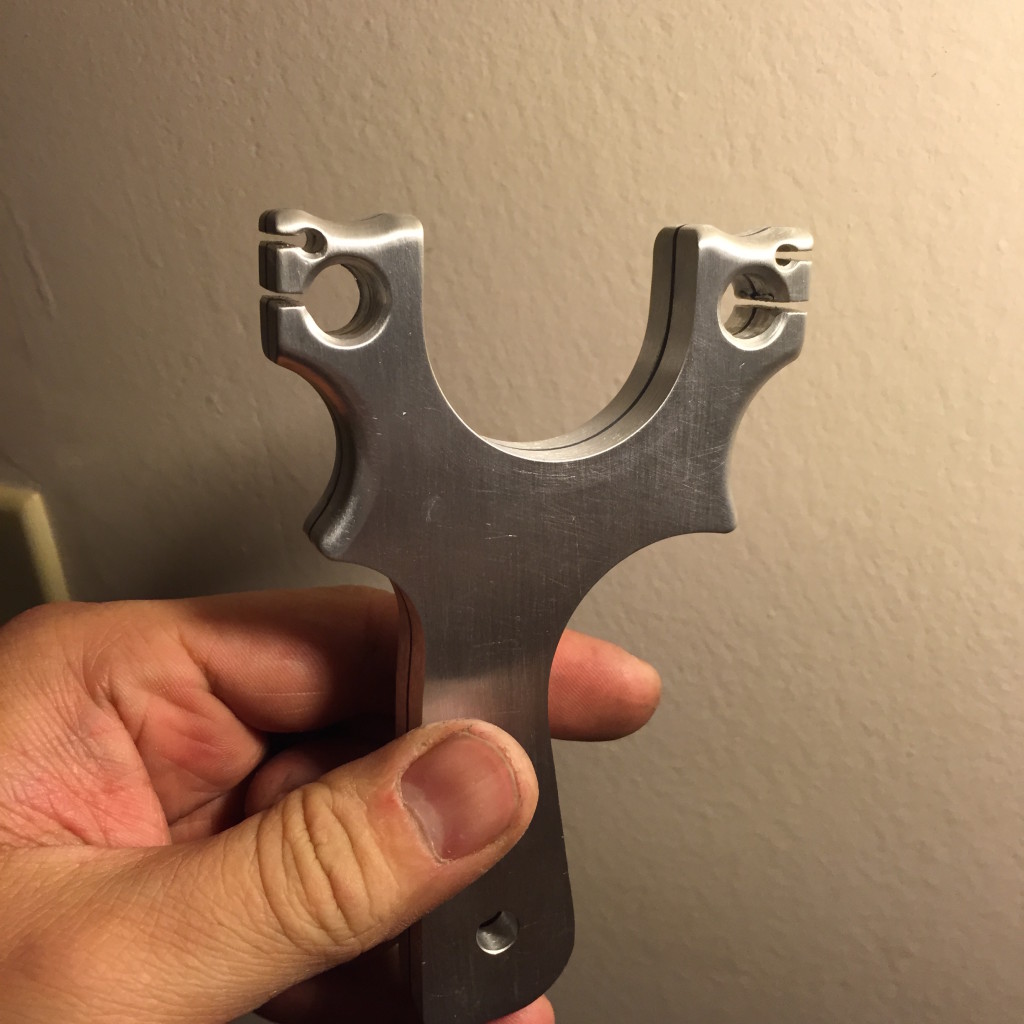 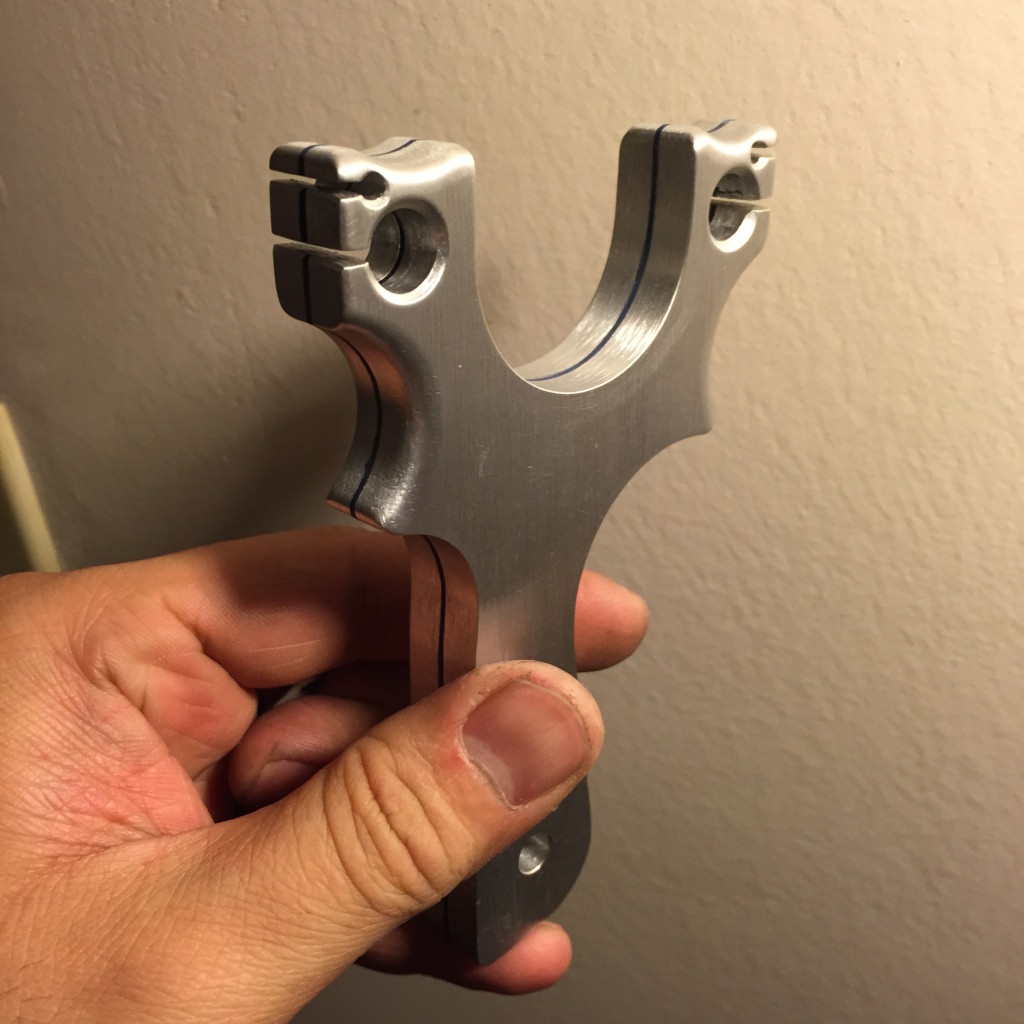 You can see here how the Worm attachment works. Since the band makes a 180 degree turn before rolling over the tips, there is no way the band will slip out. 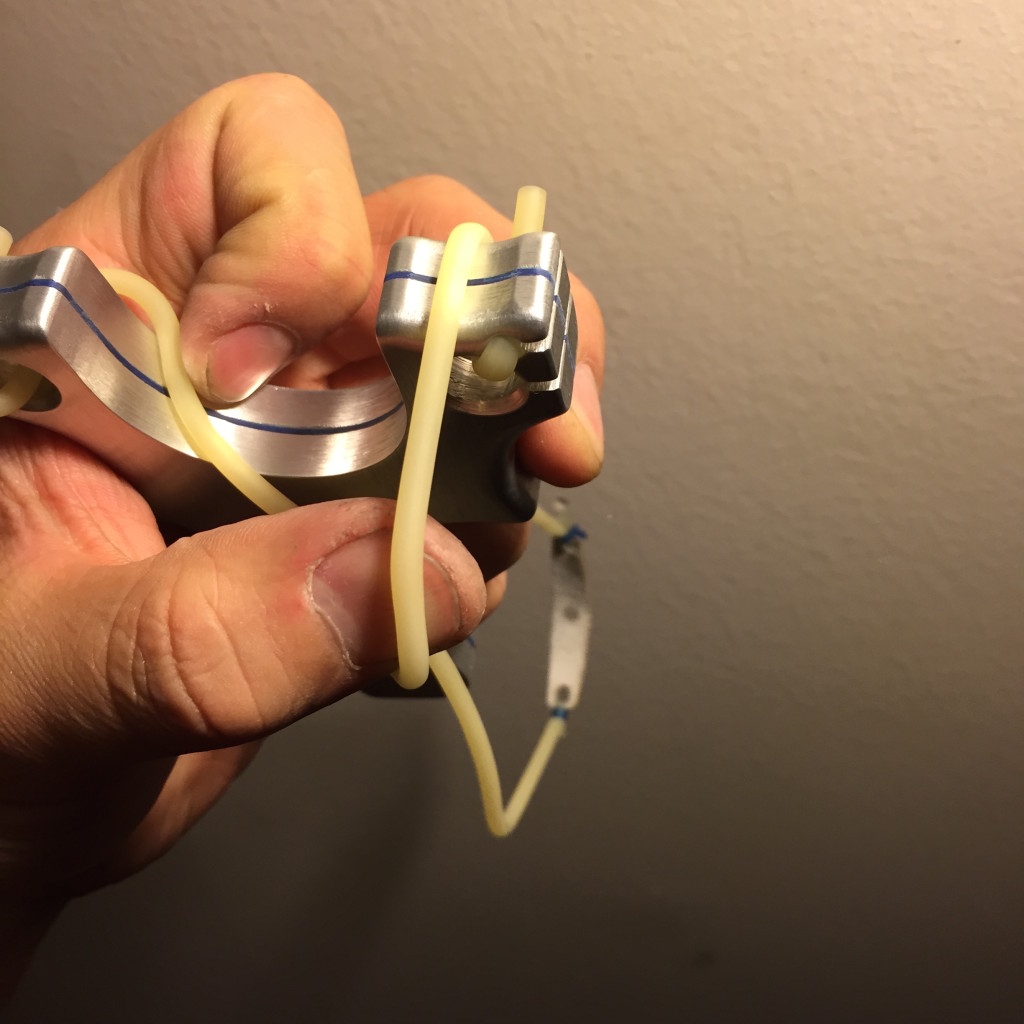 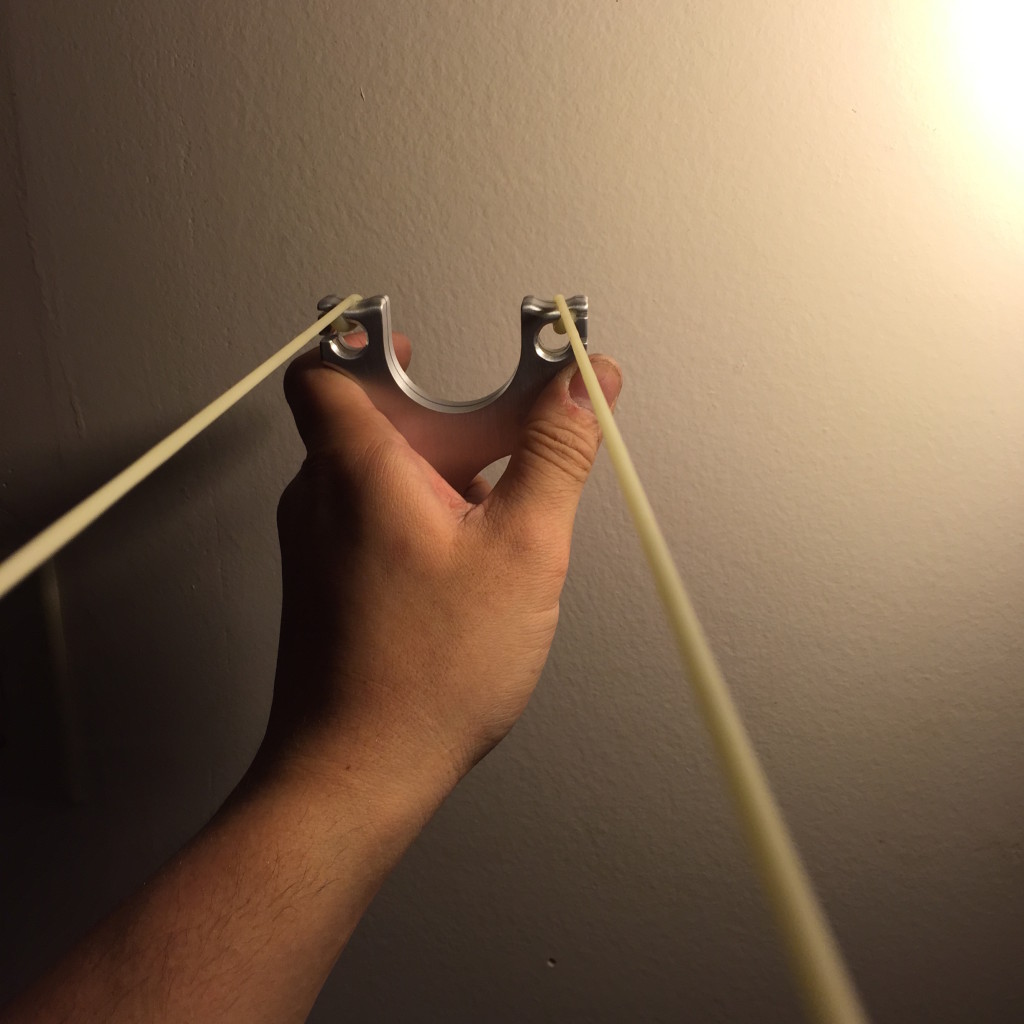 From there it was time to dress the Lumbri up! I shaped a small bit of ‘patriot’ pattern Kirinite. It was just wide enough to get to the base of the handle. After profiling it, I resawed it into to identical halves and flushed the faces. From there shaped and finsihed the front edge of the scale that touches the surface of the slingshot, like building a knife since you can’t access that area with out really damaging the surface of the slingshot.

After fitting a 1/4 brass tube a 1/8 pin, I decided to try something I’ve seen 1000’s of times on custom knives, the very popular Anso texture pattern, an intersecting series of scalloped grooves. After plunging in for my first couple of grooves, I could already tell this was going to look sweeeeeet.

The Anso pattern is named after Jens Anso, an fellow industrial designer, custom knife and gear maker. Jens first did the pattern and has since been used on many custom knives and equipment. Here he is adding this trademark texture: 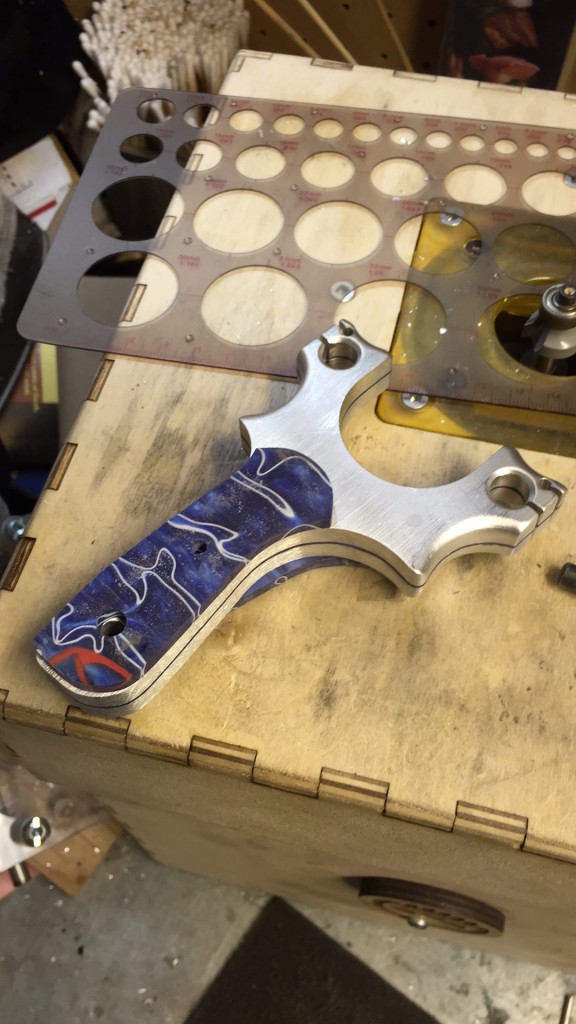 The rest are final pics, I didn’t want to ruin my work flow as the dust from the Kirinte is heavy and gets EVERYWHERE. In the end, I buffed the scales and matt finished the aluminum. I also added a Paduak makers mark and coated it in superglue to seal it up. 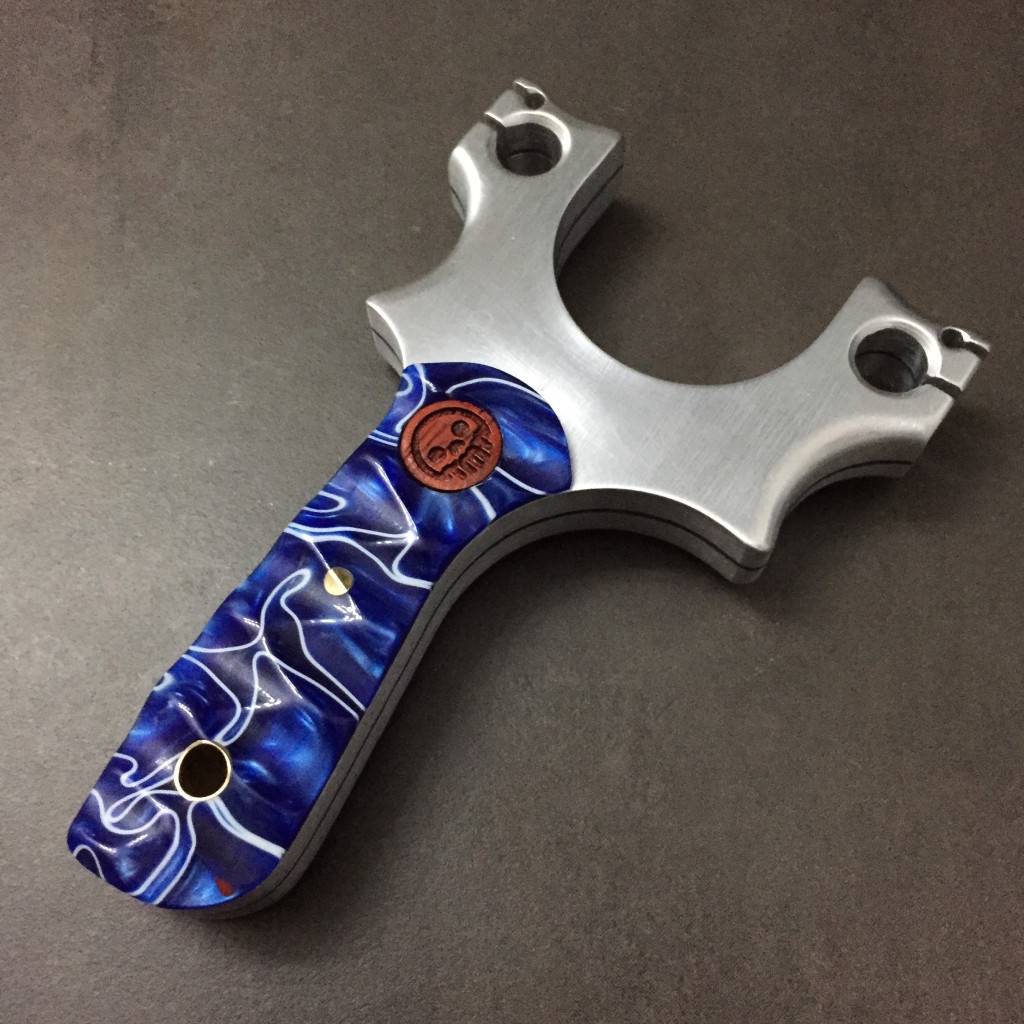 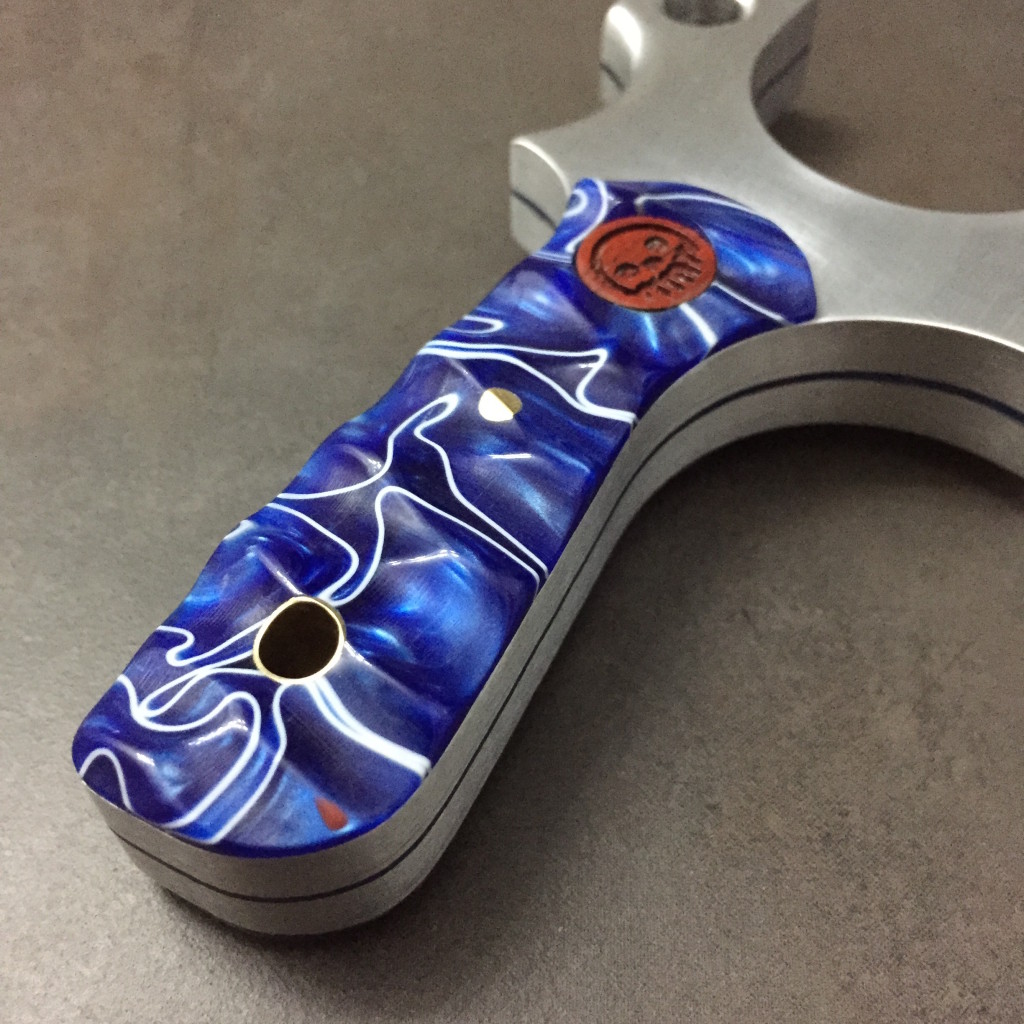 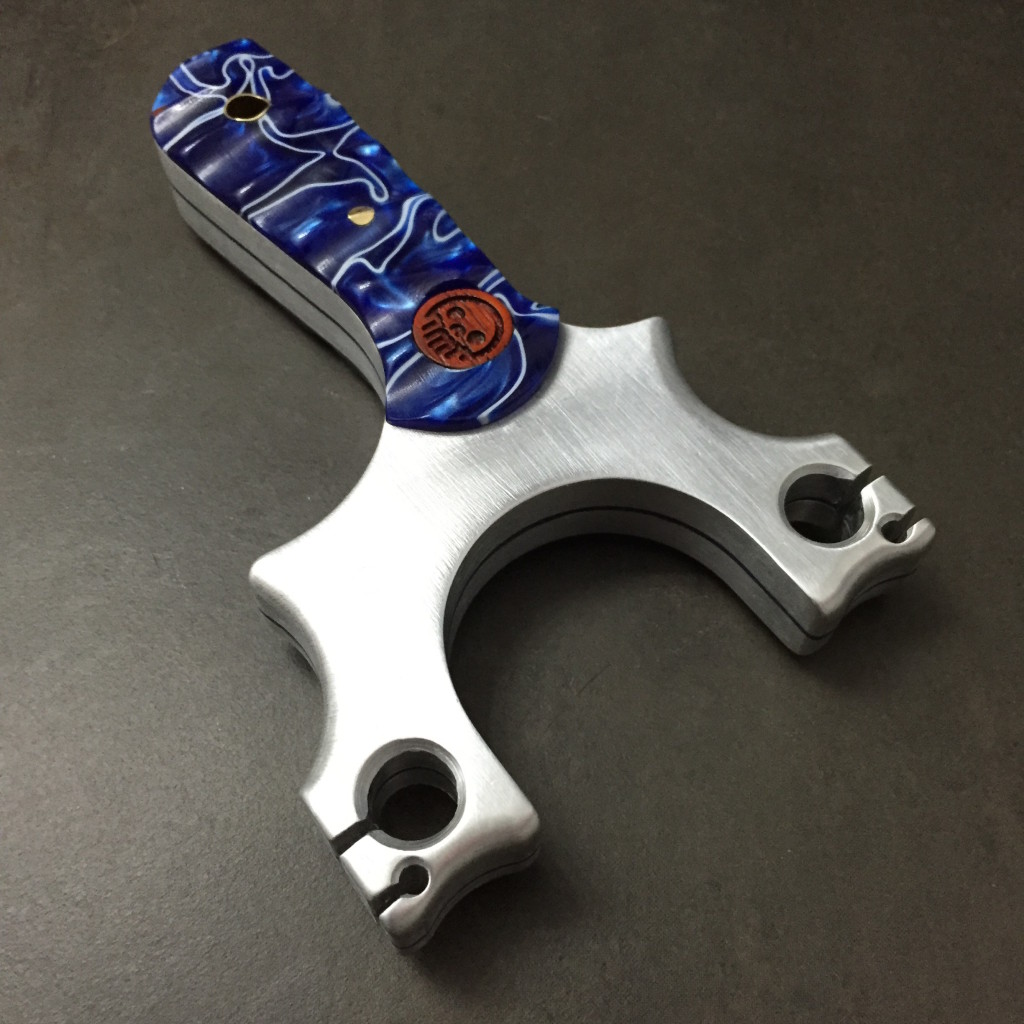 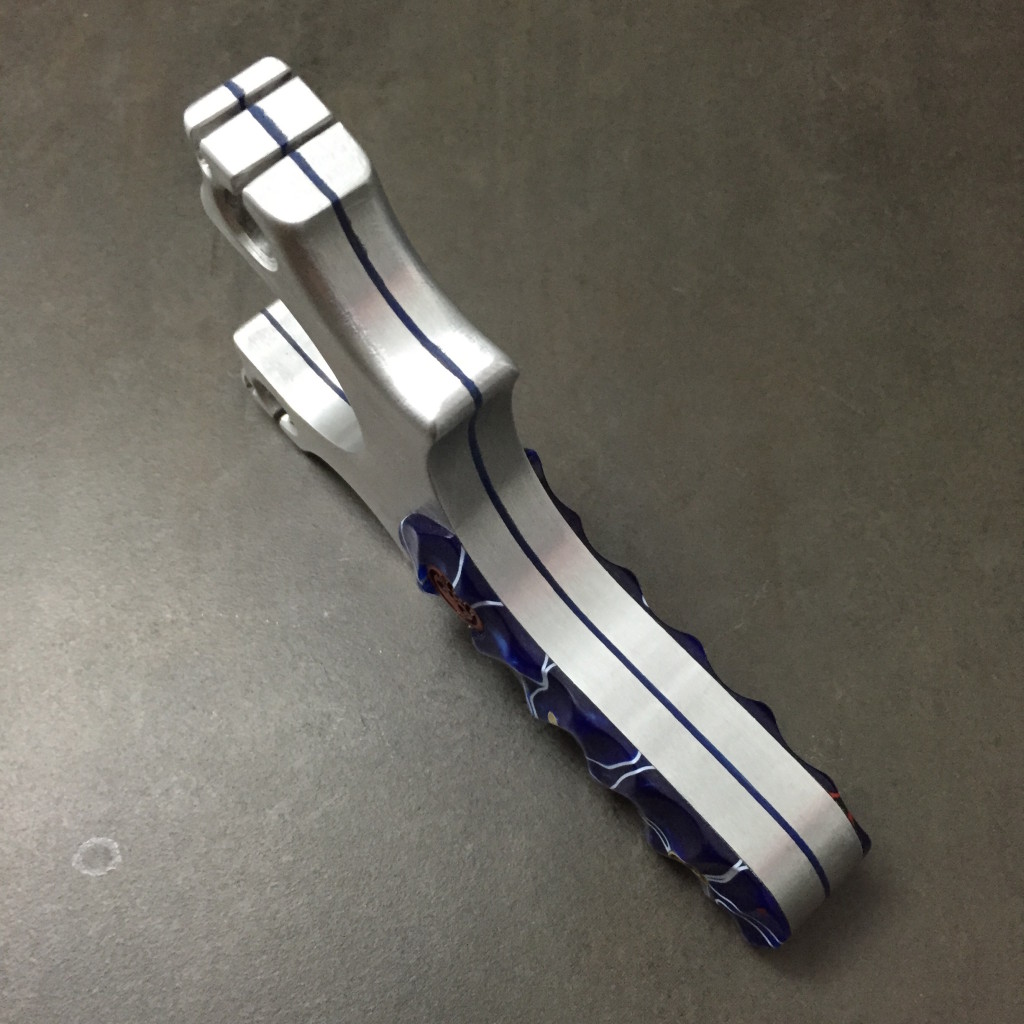 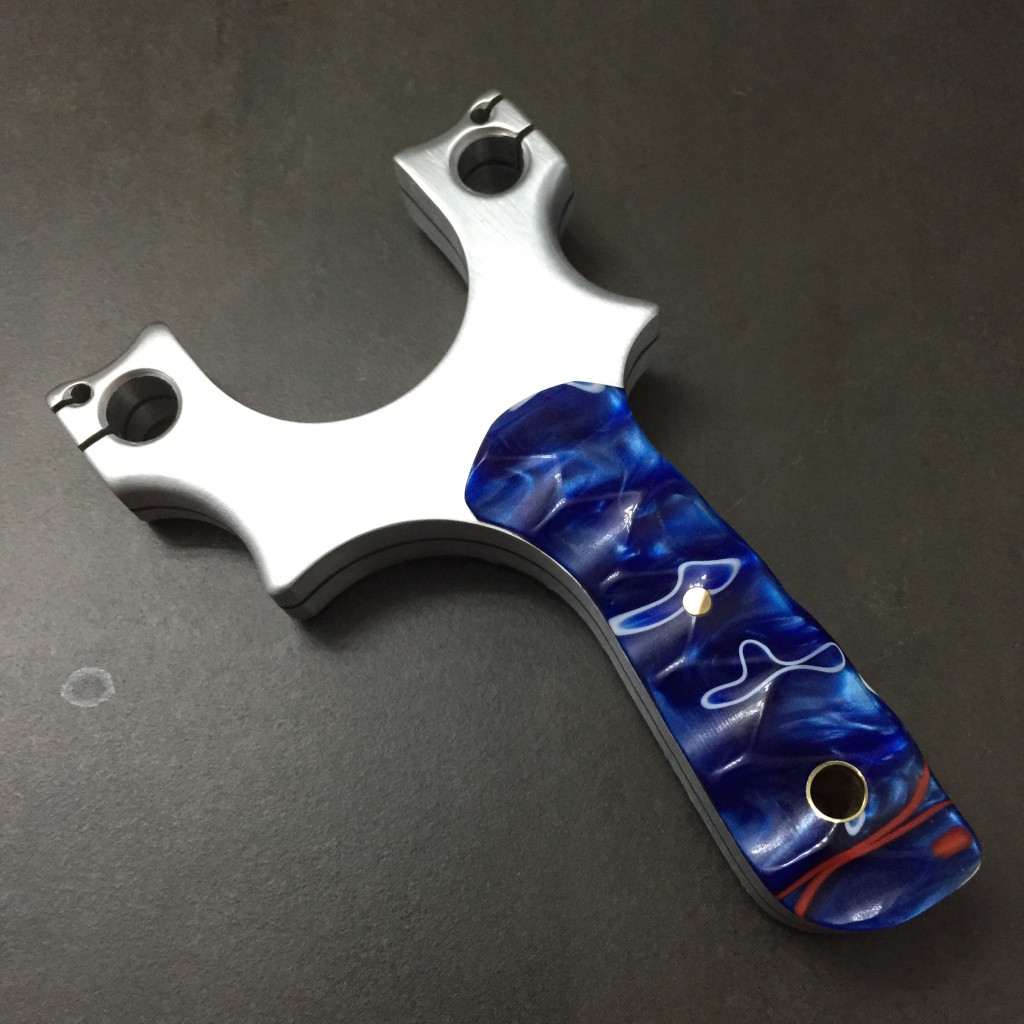 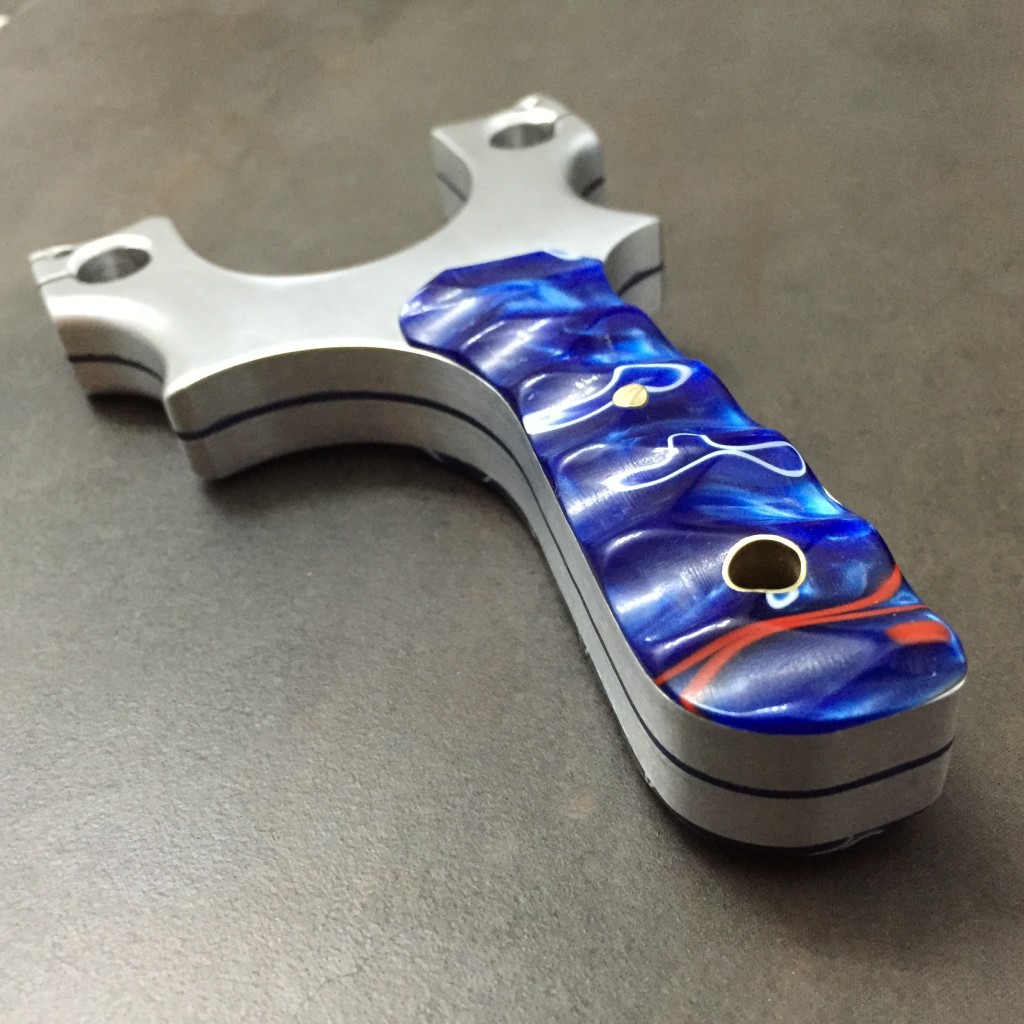 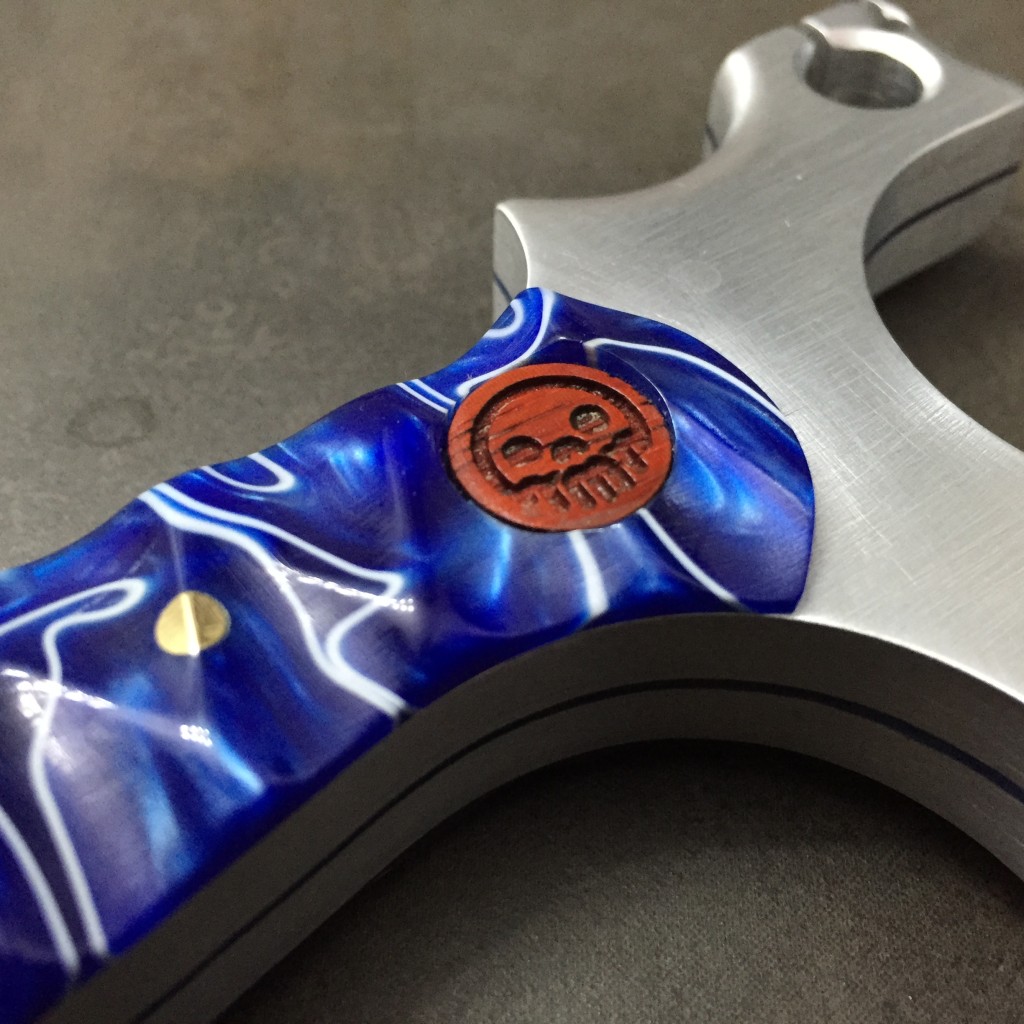 3 Responses to “Metro Made | The Wormhole Attachment (Lumbri Tyton Slingshot)”